How to Defeat the Merchants of Fear

John Perkins advises corporations, executives, and entrepreneurs on turning a Death Economy into a Life Economy (cleaning up pollution, recycling, and other technologies that create life-styles millennials want to inherit). 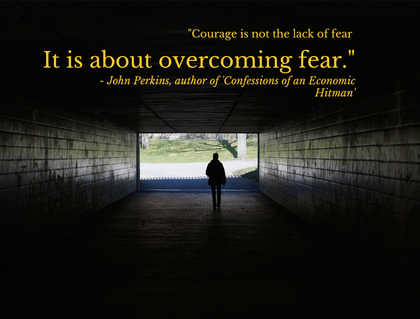 A Question and Answer Session with John Perkins

John Perkins is the author of Berrett-Koehler’s bestselling book Confessions of an Economic Hit Man. He travels the world giving talks about how to create a world that “our grandchildren will want to inherit.”

John, you are often invited to speak to gatherings of CEOs and other business leaders. Given that your books criticize ruthless corporations… why do you think the corporations always want to hear from you?

The reason they want to hear from me, is because they know it’s not working! These business executives are smart people— they’re aware that they’re using up future resources to succeed in the present, many have children and grandchildren and want a better world for them, and they want to help their companies find a way out of the trap they know we're in.

I start by saying to the business leaders, “You’re part of the greatest revolution that human history we will ever face. This is bigger than the Agricultural Revolution or the Industrial Revolution— this is a revolution in consciousness, human consciousness. All of us are waking up to the fact that the system no longer works. Everyone’s getting it— we can no longer put up with a world where 85 people have more assets than half the world’s population. This just can’t be the model.”

Then I bring up the idea— what if our tax dollars went to activities that supported life, instead of death? The subsidies could even be going to all the same companies— but the companies could change their activities. They could start cleaning up pollution instead of building armaments, helping starving people grow food more efficiently instead of giving diabetes to the rich, and so on and so forth.

I customize my speech depending on the specific industry. So, for example, if I’m speaking to the communications industry, I say: “What we want in life is for our grandchildren to look back at us and think, ‘That is someone I respect.’ So what will make your grand children respect you? You control the world’s communications— would your rather say something substantial, or would you rather talk about the sex lives of Hollywood stars and athletes?”

My message for them, is there is a whole new world out there, and it is happening right now. And I talk about all the possibilities for their company to grow and innovate in this new world.

Do you think people are more aware of economic hit men now, than when your book was first published? For example, have stories about the prison industrial complex and militarized police forces, helped to raise more awareness in the general public?

Yes, those things have helped raise awareness, but the economic collapse was the big wake-up call. In the past, everyone trusted the banks. And in the past, the banks were not likely to try to convince you to take a mortgage you could not afford. So when the recession happened, people’s confidence in some unshakeable things was shaken.

How have the world’s wealthiest people gotten masses of ordinary people to stand behind policies which exploit the poor at the expense of the rich? How did the wool get pulled over our eyes?

The secret to this is fear tactics. Back in my time, when I was an economic hit man, the fear tactics were all about communism. Nowadays, the fear tactics are all about radical Islam. But the key is to focus the attention of ordinary people on the "them" instead of the "us."  The narrative always goes like this: “We’re good, they’re bad, they’re threatening us, therefore we need to spend a lot of money on weapons, etc.” When people get afraid, their brain shuts off, and they start writing those blank checks.

That applies to advertising too— just notice how many advertisements play upon people’s fears— especially fears that they don’t belong, or fears that there’s something wrong with them. We hear, “If you don’t buy a Prius, there’s something wrong with you!” or “If you don’t eat tofu, you’re hurting your body!” Always the solution is pitched to be more and more consumption. But if we wake up to what they’re doing, they will no longer be able to control us by playing on our fears.

So much evil in this world is being done by good people. Why don’t the people working for corporations take a stand against short term and greedy strategies? Are they just afraid of being fired— or what’s stopping them?

Part of the problem is that we can’t identify with our future selves. Our future selves are strangers to us. So we undertake actions that put them at risk. But it doesn’t have to be that way. Other cultures function differently. For example, indigenous cultures will not shoot a bird in nesting season or mating season, even if that means going hungry right now. They know the future birds are more important than dinner today. We all need to adopt that mindset.

How can we fight the fear which is holding us back?

We must understand that this sort of fear is a subterfuge, a tool used to control us. Courage is not the lack of fear — it is about overcoming fear and, in this case, understanding the true motives behind the stories that implant fear. More than anything, listening deeply to others is how you unlearn the fears. We must also teach people to focus on creating new things. Creating something is more exciting than simply trying to prevent destruction or bankruptcy. We sell death using fear. But we can sell the mission of life, using a message of hope.

AFFLUENZA -- THE MOVIE!
Here in its entirety is the award-winning PBS documentary that launched the book and the movement. At first, you may feel that this film is a bit outdated, but watch for long enough, and it becomes...
Read more...

How Comedy Influences Politics and Thinking
Late night comedy shows -- especially those with a news-show parody approach -- are more than just entertainment. Research shows that while people do consider such programming to be entertainment,...
Read more...

Hayek Vs. Keynes
This video uses a rap-video parody to explain how John Maynard Keynes and F.E. Hayek differed on the economy and spending. It's catchy, it's hilarious, and most importantly, it's thoroughly...
Read more...

Enough!
Excess is not just about resources but everything -- including weapons. What is the point of this large of a nuclear arsenal? The wasted effort is so evident when one considers that the entire...
Read more...

If I Wanted America to Fail
A stunning (and, let's admit it, pretty convincing if you didn't know the facts) viral video by Free Market America that was timed to be released during Earth Day 2012 attacks sustainability...
Read more...