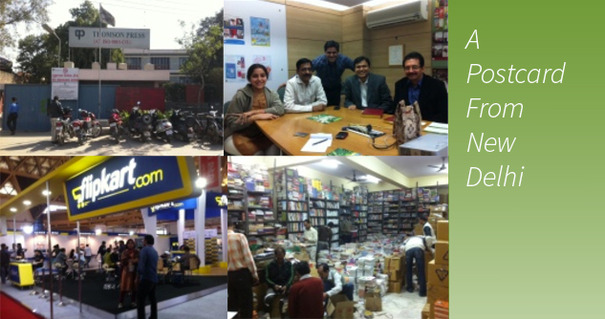 Curious to know how bookselling works in India? I was, too. BK recently signed a new distribution partnership with HarperCollins Publishers India; thanks to this partnership, BK books will now be distributed in India, Pakistan, Bangladesh, Nepal, Bhutan, Sri Lanka, and the Maldives. In February, 2012, I had the privilege to travel to New Delhi to meet with the HarperCollins staff, and to attend the bi-annual New Delhi Book Fair. Here are some of the things I learned.

What’s selling? Weight-loss, fitness, self-improvement and other “aspirational” titles are really selling well now. Leadership also sells, and books on innovation are popular. Ken Blanchard and Brian Tracy already have strong followings in India, so HarperCollins expects BK books by those authors will sell particularly well. Books that are too specific to the US economy are not likely to find an audience at all.

Price points are (almost) everything. There is tremendous downward pressure on prices for books in India. A book that sells for $19.95 in the US needs to be priced around $6 or less to find a market. That’s why BK is working with HarperCollins India to produce specially priced, locally printed Indian editions of our titles.

Set realistic sales expectations. While the Indian population is 1.2 billion (19 million in New Delhi alone), the book marketplace is still emerging and getting organized. Moreover, illiteracy and poverty continue to plague the population. Bottom line: Just because the population is large doesn’t mean sales—or net revenues—can be expected to be exponentially grand. 20,000 units is a very strong seller in India. A blockbuster might sell around 300,000 units.

Don’t Judge a Business by Its Cover. Sales representative Vimal Kumar kindly shepherded me around to meet with their biggest distributor, India Book Distributors, Ltd. and to tour local stores. I learned that “modern-looking” doesn’t mean “big sales,” and that what appears to be highly disorganized can be a significant source of revenue. At a glance, IBD looks like chaos (not to mention a serious fire hazard), but it’s actually a well-oiled money-making machine. Conversely, the very modern and spiffy chain bookstore W. H. Smith was completely empty, while The Landmark Bookstore (a local chain) had an event going on and was well-trafficked—though many of the customers were playing games on big video screens, rather than buying books.

Piracy Continues Apace. Piracy is a vexing problem in India, but there’s no clear consensus on how to tackle the problem, other than a digital portal where publishers could register an offending site. It seems to me that India has a much bigger problem at the moment with print piracy than with e-book piracy, though the problems are interconnected, in that it’s now much easier for the pirates to pilfer an e-book and then use it to produce a reasonably professional print version. The pirated versions get sold in used bookstores and at other “unofficial” stores, such as the ad-hoc bodegas that independent entrepreneurs set up on the street and in train stations. When professional sales reps do see pirated versions in legitimate bookstores, they report the offense to the bookstore, and the shopkeeper usually removes it from the shelves.

Indian Printers Are Thinking Social and Environmental Responsibility. I learned a great deal touring the printer HarperCollins uses to produce most of their books, Thomson Press. They’ve been in business since 1969 and have 1500 employees and five facilities throughout India. Other publishing clients include Wiley, Oxford, Pearson, Hodder, and Zondervan. I was happy to find a sophisticated and socially-responsible facility. Thomson Press is a fully-accredited purveyor of FSC-certified paper. All waste paper and plates are recycled. Water used in producing the books is purified/recycled on site and is repurposed as grey water, then used to water the gardens and provide water for the restrooms. The heat generated from the printing machines is turned into steam energy that then powers their air conditioning system. They’ve installed equipment that goes above and beyond legal requirements on noise pollution; you really can’t hear the machines running at all from outside the building. All workers are unionized, and Thomson has won many awards for their observance of employee safety standards.

Online Sales on a Growth Trend. Online print sales are not yet a major part of the bookselling marketplace, but they are poised to explode. The biggest player in this space is Flipkart, which is growing like wildfire and has huge billboards plastered all over Delhi. They also had one of the biggest booths at the New Delhi Book Fair. The car traffic in Delhi is dreadful, so they’ve developed an efficient system for delivering books and other products via bicycle. Everyone expects Amazon to open in India in the first half of 2012, and the ensuing competition between Amazon and Flipkart is likely to be intense.

E-Books in Their Infancy. E-books have essentially no market yet in India. Devices are too expensive, and there’s not enough formatted and locally-priced content available to make a viable market. Flipkart is working on a plan to roll-out e-books sometime this year. Several told me that Indians much prefer reading on their mobile devices—everyone had one, and everyone was using it, all the time. The current device of choice among business professionals is the Blackberry. I didn’t see a single iPhone or a single e-reader/tablet “in the wild” after I stepped off the plane.

For Authors, the Same Rules Apply. While the bookselling marketplace in India has its idiosyncrasies, authors who hope to see their books sell well in this country would be wise to follow the same guidelines that apply in the US: travel there, speak locally, and build word of mouth through local contacts. Here are some tips on how to help your book sell internationally, and here are some more tips on building publicity contacts overseas. And, of course, to quote India Book Distributor’s regional manager Baldev Verma, “the best thing BK and its authors can do to drive sales in India would be to continue to publish very good books.”

I hope these observations are interesting and useful to you. If you have questions or would like to learn more about BK’s partnership with HarperCollins, please feel free to contact me.