BK's Response to the DOJ Suit Regarding E-Book Pricing 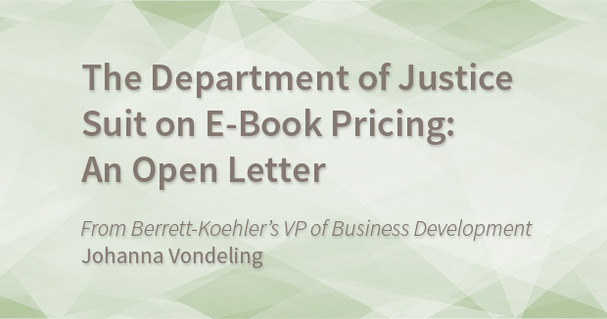 Below is an open letter Berrett-Koehler has submitted to the Department of Justice anit-trust suit regarding alleged e-book price fixing by Apple and five publishers. To all members of the BK community: comments and questions welcome.

I am writing on behalf of Berrett-Koehler Publishers, to comment on the announced settlement between the Department of Justice and three of the publishers named in its lawsuit. Berrett-Koehler is a small, independent publisher that employs 23 people. Our mission is “creating a world that works for all.” It is our hope that the eventual resolution of this case will help create a more democratic and competitive environment in the e-book marketplace.

We request that the Department of Justice, as part of its ultimate settlement of the suit, unambiguously affirm the legality of the agency model. When the agency model first emerged as an option in 2010, we were heartened by the development. The model presented an opportunity to create clarity and transparency in pricing to customers, and it held the promise to level the playing field across the spectrum of e-book vendors, most of whom cannot afford to sell e-books at a loss. Even though we and our authors make less revenue on any new release e-books sold under the agency model than on those sold under the wholesale model, it is our conviction that the greater competition in the e-book marketplace provided by the agency model is in the best interests of our authors and our customers.

With respect to future agency contracts, we support the removal of all terms from all contracts that limit negotiated retail and promotional innovation, such as MFNs (most favored nations clauses) related to consumer price, requirements for print and e-book editions to be released simultaneously, retailer-set pricing bands, and other such anticompetitive restrictions. We certainly also support the banning of price-setting agreements between competitive publishers and the prohibition of illegal sharing of confidential or competitively sensitive information.

We need the Department of Justice’s help addressing threats to free and fair competition posed by the uncertainly now surrounding the agency model. As a small publisher, Berrett-Koehler has effectively no ability to influence the much larger players in the e-bookselling marketplace. We can choose to accept the terms offered by the largest players, or we can choose to exit the e-book marketplace – for BK, there is no opportunity to negotiate terms or models. We are requesting clear affirmation of the legitimacy of the agency model so that there is no confusion in the marketplace as to its status, regardless of any alleged collusion on the part of the companies named in the suit. We also request that you devote similar zeal to investigating any and all anti-competitive pricing practices by retailers not named in the suit.

It is our belief that the agency model is in the best interests of the largest number of participants in the e-book marketplace. We believe that if it is widely and fairly implemented, the agency model will enable the market for e-books to find its true equilibrium. We were deeply troubled by the increasing consolidation of economic power in the hands of a single retailer we witnessed prior to 2010, and we were relieved when the emergence of the agency model provided an alternative to the complete monopolization of the e-book marketplace. We were looking forward to experimenting with the freedom promised by a pure agency model, to test various prices, and to thereby determine which prices worked best for all parties: BK, its shareholders, its authors, and its customers. It is not in Berrett-Koehler’s interest to gouge its readers; if we price our e-books too high, the market will correct us. Broadly instituted, the agency model advances free and fair trade. However, the proposed settlement introduces ambiguity regarding the legitimacy of the model itself. With the legality of the agency model currently in question, we are prevented from learning what the market really wants, and what the true market value for an e-book really is.

It is our hope that by unambiguously affirming the legality of the agency model, the Department of Justice will eliminate any confusion in the marketplace and allow true market economics to assert themselves. Such an action would be in the best interests of free and fair enterprise—for e-book sellers, customers, authors, and publishers alike.

Creative and Profitable Alternatives to Layoffs

A New Approach to Solving Our Most Complex Challenges