Jeffrey Clements is a cofounder and general counsel of Free Speech for People, a national, nonpartisan campaign to oppose corporate personhood and pass the People’s Rights Amendment. 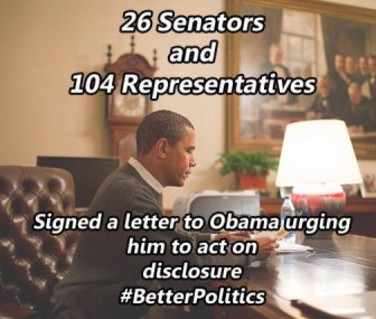 Today, members of the House and Senate sent letters to President Obama, calling for an executive order that would require federal contractors to disclose their political spending. The letter comes after months of growing nationwide support from concerned citizens calling on their representatives to support this initiative. In April,  our allies and partners rallied outside the White House to deliver more than half a million petition signatures calling on President Obama to issue an executive order. On that same day, more than 30 states held events in support of the action and supporters flooded the White House circuit boards with more than 6,000 calls demanding an executive order.

Corporations can spend hundreds of millions of dollars on elections, without the public knowing or holding them accountable. More than 40% of outside expenditures in the 2014 elections were made by groups that did not fully disclose their donors. We know that dark money in our elections is a major threat to our democracy—no matter the source. An executive order is an important step to curb outside spending and to shine a light on dark money flooding our elections.

The U.S. House of Representatives letter (PDF), led by U.S. Reps. Anna Eshoo (D-Calif.), Steve Israel (D-N.Y.), Mike Capuano (D-Mass.) and Donna Edwards (D-Md.), states: “Taxpayers have a right to know where their money is spent and you have the power to ensure that the American people can obtain this information. With public funds come public responsibilities, and any company receiving federal tax dollars should be required by Executive Order to fully disclose their political spending in a timely and accessible manner.”

The U.S. Senate letter (PDF), led by U.S. Sen. Sheldon Whitehouse (D-R.I), states: “Political spending by government contractors is a problem you can address without congressional authorization. You would be on solid legal ground if you were to issue an executive order requiring disclosure of political spending by entities that have been awarded government contracts and their senior leadership. The order could also take into account transfers to and from shell corporations and non-profits, to prevent evading disclosure requirements.”

The post 130 Members of Congress Deliver Letter Calling on President to Require Transparency in Political Spending appeared first on Free Speech for People.