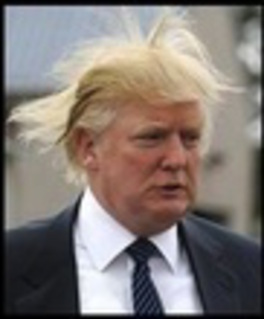 Donald Trump has received his fair share of ridicule and mockery, but the truth is, he would make for a fantastic president. After all, isn't this nation ready for a leader who will shake things up and really bring America back? Here are ten great reasons to bring Big Orange into office:

2. Striking down of all defamation and libel laws; legally acceptable to insult anyone anywhere at any time without fear of prosecution.

3. Winner of Miss Universe pageant gets to be Secretary of State for a year.

4. Will spare United Nations and other global organizations millions in expenses by refusing to travel to negotiate or speak with anyone he doesn't like.

5. No limits on amount of times anyone can declare bankruptcy thus creating a totally easy way to get out of paying parking tickets.

6. Free spray-tanning for all members of cabinet.

8. As an alternative to 401(k)s, citizens are encouraged to take their life savings and try their luck at any Trump casino.

9. Will attempt to get his buddy Tom Brady into the Supreme Court citing the need for greater diversity because of "total lack of bro's in that nerd-tank."

10. All U.S. citizens will be able to apply to emmigrate to Canada as political refugees.

Six Reasons to Be Afraid