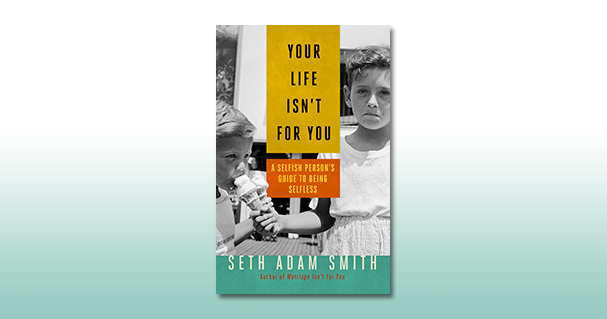 In Seth Adam Smith's latest book, he talks about the value of selflessness in a world that is focused on pleasing only the self. There are other books like this but none with the humor and frank confessions found in Seth's writing (not to mention his thoroughly imperfect and anything but holier -than-thou persona).

Being selfless is a pain. Why do it? Seth presents below three good reasons why you shouldn't bother being selfless. Then he goes and ruins his own arguments by saying why there are three better reasons to be selfless:

#1 - Nobody Notices Selflessness: Turn on the television or surf through the internet and it’s painfully obvious that the world cares WAAAAY more about selfish, egotistical people than people who are trying to make a positive difference in the world. (Small example, Justin Bieber has fifty-four MILLION Twitter followers. Whereas the Twitter account for Malala Yousafzai’s Fund to help girls go to school has just a fraction of that).

A Better Reason to Do It Anyway: But are we in it for the glory and praise? Or are we in it to make a positive difference? Acts of selflessness might fly under the radar of the public eye, but they often change lives for the better. And anyway, the idea of being "selfless" kinda argues against the need for recognition and adoration (otherwise it wouldn't be selfless, would it?) Besides, within a few short years, the name and fame of selfish celebrities will fade. In contrast, the light and influence of truly selfless people will continue to grow stronger and brighter with time.

#2 - I’m An Introvert: Selflessness requires you to, you know, deal with people and being around...others. I hear ya. I’m a pretty serious introvert myself and social events often drain me of energy. Whenever I’m approached by extroverts (who always seem to have really, really big teeth) they seem to believe that it is their mission in life to rescue me from my solitary (yet voluntary) confinement.

A Better Reason to Do It Anyway: But I’ve learned that being selfless doesn’t mean ignoring my natural need for space and introspection. It simply means that I consciously allow room in my heart for others, because true happiness is found with others. I've learned that our joy in life is inexorably determined by the degree to which we love, so it's not a matter of losing your own space, just creating more space for others.

#3: Selflessness is a Loss - Self-sacrifice and giving is very draining -- both physically and mentally (not to mention emotionally). When you keep giving selflessly, the result is often a jaded soul that can be cynical and depressed with all it has seen.

A Better Reason to Do It Anyway: Actually, there's another side to this argument. Have you noticed that some of the best things in your life come to you because of your willingness to give time and energy to others (love, marriage, family, friends)? In a paradoxical way, selflessness—giving healthy levels of time and energy to others— is the best way to serve yourself.

And now, a message from my dear friend Ron Swanson on how to give to others.