The Top Five Inaccurate Beliefs We Have About Ourselves 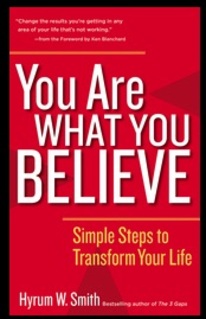 In his latest book, Hyrum Smith addresses the damage done by self-limiting beliefs and shows you how best to align yourself with positive beliefs for greater quality of life. We all fall victim to several beliefs that we hold to be true even though little evidence exists to support them. Culled from extensive research by psychologists, sociologists, and researchers, here are the five most common inaccurate beliefs:

1. "The only thing standing between me and happiness is ________." : This is perhaps the most common and most compelling belief because it never goes away. Once you achieve that elusive happiness-maker, you will find something else to pine for. We are actually evolutionarily wired to always be wanting more because complacence kills the need for survival awareness and the need to procreate, but this wonderful evolutionary trait can also stop us from appreciating the now, and research has shown how longing for "future salvation" is a problem.

2. "I could do __________ if I only had more time.": A very common belief that is also inaccurate. As Hyrum Smith himself has explained, you have time, you just need to prioritize it. When you say you don't have enough time for something, you are basically admitting that you don't prioritize something highly enough to give it time. Research has shown that our perception of time is not factual (as we believe it is) but subjective--which means you have the time, if you can believe you do.

3. "My actions can change others." : This is simply not true in any arena though you most often hear it echoed in romantic relationships (the stereotype of the partner who believes he or she can change the person they're with). But this is true among friends, work colleagues, and just about anyone else. Change is self-directed, and the best that you can do is help--if it is wanted. Much as we wish otherwise, it is a proven fact that we can't change others.

4. "There is something negatively different about me.": It's actually a normal sociological phenomenon referred to as socialization. In any community or group, there is a system of standards or metrics for measurement of skills, abilities, and other qualities that allows for people to "fall in line" for the sake of better co-existence. The downside of this is that we feel flawed or lesser. But the rub is that we actually hold on to this misery because it makes us feel special. We enjoy being the victim and gain pleasure from seeing ourselves as damaged.

5. "I need more." : it would be wrong to assume that this is an affliction for the rich only. All of us regardless of class and income always want for more. Called the Diderot effect, it is about the need to want things that we do not need, and it is the most prevalent self-belief in the world. All that we really need is basic food, basic shelter, and simple clothing, that will never do. It is impossible to escape this phenomenon (though some have managed to escape its clutches almost entirely), but it is possible to recognize it and limit it.

A Human Saint
A lot of controversy has been stirred by the recent publication of several of Mother Teresa's personal letters where she confesses to a lack of faith and conviction in her work and her belief in...
Read more...

The Purpose of Life -- According to George Carlin
No one makes it easier to understand what our lives are all about. (Please be warned that the language George uses in this piece, as is the case with all his pieces, is rated PG-13.)
Read more...

A Full Life In Just The Final Third...
Yes, it's an ad, but that doesn't mean it's not clever. Never too late to live the good life!
Read more...