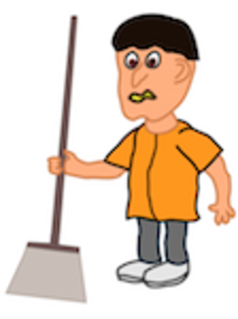 A professor, a CEO, and a janitor are all walking in the forest when a fairy magically appears. The fairy says "I will give you what you most desire if you do someone else's job for a day."

The professor says, "I'll be an elementary school teacher. What can be so hard about teaching a bunch of 6-year-olds how to read?" So he is teleported into a classroom. After a few minutes, all the kids' screaming gets to his nerves, so he throws his teaching supplies into the garbage and gives up.

The CEO says, "I'll be a waiter. All you do is carry food back and forth. This'll be a breeze!" So he is teleported to a restaurant. After about an hour, all the annoying customers drive him insane, so he smashes his plates on the ground and gives up.

The janitor says, "I'll be an artist" so he is transported to an art facility. He glues all the professor's trashed classroom supplies and the CEO's shattered plates to a canvas, calls it art, and then sells it for a million dollars. The fairy asks the janitor how he was so clever.

The janitor says "Oh, well I have a masters degree in art."

Moral of the Story: Art degrees can, in some ridiculously fantastical circumstances, be useful.

Be the Boss Everyone Wants to Work For

A Guide for New Leaders

Be the Boss Everyone Wants to Work For (Audio)

A Guide for New Leaders