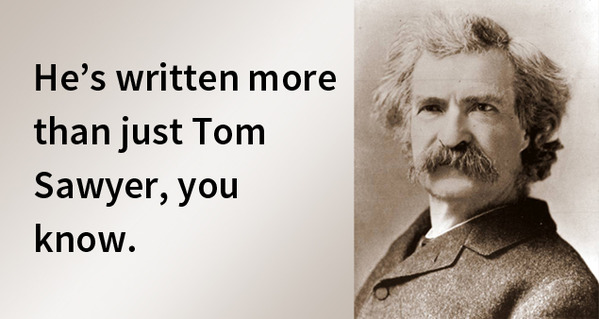 Authors are often best known for just a handful of titles that helped establish them in a genre, but few realize that many authors of note wrote outside of their genre, too. The following five authors all had publications that were a major departures from their standard offerings:

1. Old Possum's Book of Practical Cats by T. S. Eliot
Unlike his other darker, deeper poetic works, this is a whimsical collection of poems about different types of cats with names such as Rum Tum Tugger, Jennyanydots, and Jellicles. Andrew Lloyd Weber's smash musical Cats was based on this book. Yes, the same Eliot who wrote The Wasteland.

2. Human Ordure by Jonathan Swift.
Swift is best known for his brilliant satires such as Gulliver's Travels but was is less known was that he was rather obsessed with the subject of defecation. He even wrote this work on the subject under the pen name of "Dr. Sh*t." He also wrote a shorter piece titled The Benefit of Farting.

3. Untitled "squib" by Mark Twain
Twain's novels are considered the cornerstones of American literature but few know that Twain wasn't always penning epic works such as The Adventures of Tom Sawyer. From time to time, Twain liked to indulge another side of his literary passions. He wrote short pieces of pornographic fiction including this one which was set in England in 1601.

4.  The Acts of King Arthur and His Noble Knights by John Steinbeck
Steinbeck captured the feel of the Depression era more accurately and poignantly than any other American author in novels such as The Grapes of Wrath and East of Eden, which is why it's strange that he had this obsession with English Arthurian legends. Most of this book is based on Thomas Malory's fifteenth-century work Le Morte d'Arthur.

5. A Lifted Veil by George Eliot
If you know George Eliot's work, then you know them to be heavy pieces such as the tale of child murder in Adam Bede or the examination of political reform, hypocrisy, self-interest, and idealism in Middlemarch. However, this novella concerns a man who has telepathic abilities and those senses inform him that his wife is plotting to kill him. Apparently Ms. Eliot took a left at the Twilight Zone!

Harness the Power of Surprise for Business Breakthroughs