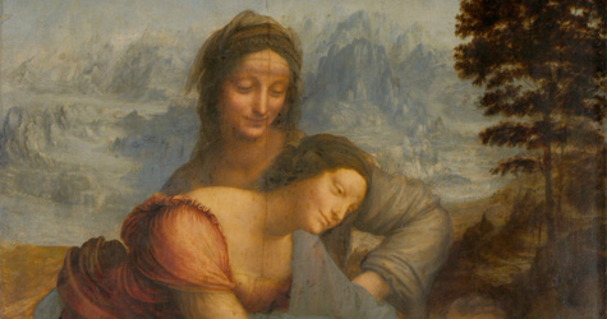 In his latest book, Fritjof Capra discusses how the legendary thinker and artist Leonardo da Vinci recognized patterns and systems in art and science, and how that recognition taught him to anticipate and create things the likes of what had never been seen before.But da Vinci himself was a unique character, and the facts about his life and practices are every bit as fascinating as his creations. Here are five things you probably didn't know about this true Renaissance man:

1. His name is not Leonardo da Vinci. Leonardo was born to parents who were not legally married and so did not have an “official” surname (in keeping with the laws of the time). "Vinci" was the name of the town where he was born in Italy. Leonardo da Vinci simply means “Leonardo of Vinci.”
2. There's a reason his sketchbooks are as full as they are.
Many people have commented on how richly and fully illustrated Leonardo’s notebooks are, with each page seemingly crammed with numerous studies and sketches. The reason for this may have been financial more than anything else, however. Paper was very expensive in Leonardo's time and so it would have been in his best financial interests to thoroughly use every spare portion of a page whenever possible.

3. His diet was radical for its time. Leonardo was a vegetarian and also drank no milk, which was very rare for his time since meat was considered a staple part of the diet of even peasants and the poor. Even more surprising, Leonardo practiced vegetarianism purely for humanitarian reasons. He also had a wonderful habit of buying caged birds just so that he could set them free.
4. No one can find a single sculpture by him. Despite being such a master of many mediums and capable of all sorts of design, there remains to this day no piece of sculpture that can definitely be attributed to Leonardo. Historians have also been able to determine that he learned sculpture as an apprentice in Verrocchio’s studio, but no “signed” pieces have every been located.
5. He learned anatomy in a very questionable way. While his respect for the living was quite evident, he didn’t mind so much desecrating the dead -- at least in the name of science. Leonardo would often steal into graveyards at night to dig up corpses so that he could study human anatomy.