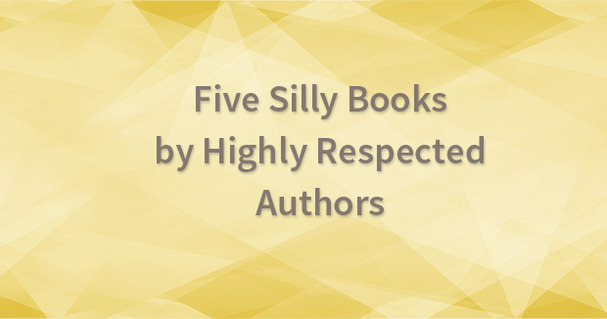 We are all prone to silliness sometimes but writing an entire book shows commitment to the silliness craft. This is made that much worse when the author has a great deal of respect in society as a serious and gifted writer. But, as these examples show, all authors -- even good ones -- fall prey to the silly bug:

1. H.P. Lovecraft
Considered one of the masters of horror and fantasy, Lovecraft wrote deeply pessimistic and cynical, works challenging the values of Enlightenment, Romanticist, and Christian humanism. Lovecraft’s protagonists usually achieve the mirror-opposite of traditional gnosis and mysticism by momentarily glimpsing the horror of ultimate reality. But then, he also wrote Sweet Ermengarde, the Street, and the Terrible Old Man, which is a whimsical farce (and not a very good one, either). It was a silly tale about buried gold and wealth from treasure and was pretty pointless.

2. Nostradamus
A name familiar to conspiracy theorists and some scholars, Nostradamus is well-known for his predictions which some say accurately warned of Hitler, the Kennedy assassination and even 9/11. However, Nostradamus also wrote a pretty damn popular book of jam recipes. Yes, jam recipes. Not only that, but his cookbook became a bestseller (back in 1555). Really.

3. Benjamin Franklin
This statesman is not just a legendary founding father but also one of the authors of the Declaration of Independence. His autobiography was yet another influential work that remains standard reading for leaders and policy-makers to this day. However, he also wrote a short treatise titled Fart Proudly, which was an argument for how scientific resources should be used to find a way to make farts smell more like perfume since farting is necessary and yet emits an unpleasant odor. To be fair, he wrote this as a joke and a reaction to the ridiculous and pretentious pseudo-academic atmosphere he encountered in Europe where noted scholars were supposedly arguing and debating the silliest things.

4. Arthur Conan Doyle
This writer introduced Sherlock Holmes to the world -- perhaps the best known literary detective ever. His stories were clever and sharp and reflected a level of intellect and creativity well beyond that of most writers. And this is why it just seems so impossible that Doyle suddenly started believing in fairies and was one of the people duped b the famous Cottingley Fairies hoax. This was the man who created Sherlock Holmes and yet he believed that the photos of two teenage girls playing with what were obviously cardboard cut-outs of cartoon fairies were absolutely real. Cementing his downfall was the fact that he then wrote a whole book titled The Coming of the Fairies about why these fairies are real. As we all know, the children themselves admitted to faking the whole thing later.

5. Roger Ebert
Pulitzer Prize winner Roger Ebert set the standard for film and movie reviews and many films either rose or fell based on his assessment of them. He was a gifted writer and journalist who was not afraid to go against the grain in his writing. This is why it remains a mystery as to why he wrote the screenplay for the movie Who Killed Bambi? This aborted film was to star the Sex Pistols and contained some very depraved scenes (such as showing Sid Vicious shooting up heroin with his mother and then having sex with her). Thankfully, the film never happened.