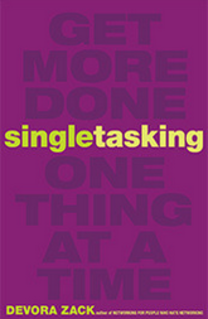 In Devora Zack's new book, she argues for the benefits of singletasking over multitasking. Put simply, multitasking is not the way to get things done properly, though our culture tells us there is no other option. There is another option, and it is singletasking -- focusing on one priority or issue at a time with complete attention all the way to completion.

1. Your brain is built for singletasking: Neurologists and researchers have shown that your btain is capable of balancing only two things at a time at most. Overload it any more and it becomes overwhelmed and incapable of balancing concentration and attention adequately.

2. Multitasking makes you fat. Well, maybe not fat, but it definitely makes you put on weight. Studies have shown that those who tend to multitask at mealtimes or when they are hungry end up overeating. This is because the mind is not focused on the task at hand: getting nutrition, so you are less likely to know when you are full.

3. Singletasking is the key to creativity. Extensive research conducted by academic researchers has shown the moments of creative insight and "a-ha!" instances only occur in an uncluttered mind. The more competition there is for the mind's attention, the less it wanders into creative and non-traditional areas and patterns.

5. Singletasking is real; multitasking does not exist. There have been countless productivity experts and scientists alike who have made this compelling argument: there is no such thing as multitasking. The very phrase "multitasking" suggests accomplishing several tasks simultaneously. However, all the evidence shows that the "tasks" are never done as competently or as thoroughly as they should be in most cases of multitasking, so what is really being achieved? Can it be called multitasking if the tasks are not handled?

At last! Multitasking is doing lots of things at once with substandard results on each of them--what a triumph! Such a refreshing idea. Thanks, B-K, for publishing this one.

The 5th point above really resonates with me. My brain starts frying when I try to layer one task after another when each task is only a few seconds long. It seems like multitasking, but it's really just frenzied singletasking disguised as multitasking. I'm trying to banish any singletasking task under 20 seconds, and that seems to improve my flow and prevent brain freeze.

I wonder if there's a generational factor here. I often see younger people doing work, being on social media, and other stuff all simultaneously. We tend to think they are not paying attention but maybe for them multitasking is singletasking, in the sense that to really focus on something, they need active diversions.

The Search for Sanity in a Wired World

Get More Done- One Thing at a Time