Five Reasons Why Mobile Is the Future of Business 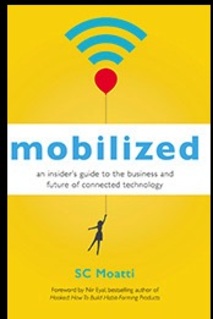 SC Moatti's latest book explores the present and future of mobile technology and how the best mobile applications all share certain traits that make them popular and profitable.

But is mobile really the future? What's the evidence of this? There's plenty of evidence, and here are just five facts that prove why the mobile revolution is here and here to stay:

1. Mobile screens are viewed more often than any other--including television. The U.S. Bureau of Labor Statistics reported that television viewing time has remained at a flat 2 hours and 48 minutes on average daily, whereas smartphones and mobile devices garner on average 2 hours and 57 minutes on average daily. Television once accounted for the greatest amount of screen time -- followed by desktop computer monitors, but now mobile devices hold the title.

3. Mobile search queries officially outpaced desktop queries in 2015. Recently, Google's Adwords blog reported that for the first time more users submitted queries using their mobile device than from a desktop computer. So what does that mean? Well, if they are searching using a mobile device, it means they are going to relevant sites from those search results using the same mobile device. Pretty soon, the majority of unique visits to any public site are going to come from mobile devices, so those sites better be mobile-capable.

4. Entrepreneurship Accelerated/Monopolies Destroyed. It used to be that only large companies would release apps because only they had the time and resources to build, test, and develop software. However, mobile technology requires a lot less time and expense, and most importantly, just about anyone can create mobile apps by teaching themselves at almost no cost. This means that individuals with no financial resources can become millionaires with a successful app and more importantly, large tech companies no longer control the marketplace. What does this mean for the consumer? More app selection at more competitive prices. Remember when you had a Palm Pilot and it cost $15-$20 to register simple software to balance a checkbook? Now if something costs more than $3, people balk.

5. Data storage is no longer a problem. The biggest impediment to mobile technology used to be data storage. Apps and data take up more and more memory, and then we discovered the cloud. Instead of storing gigs of data on your device, now you just store it in the cloud and pull it up whenever you need. A high-res feature film used to take up 2-3 gigs of memory, but now you can just stream it directory from the cloud. You can actually store your whole movie collection, photos, books, and anything else for less than the price of a Starbucks latte every month. Device memory taken: 0.