Five Questions About The National Inquirer 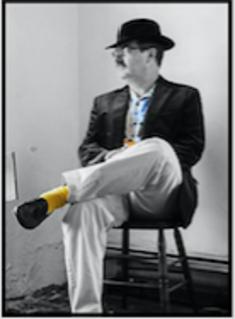 Chris Rodell is an author and journalist who has worked for some of the most established magazines and media outlets in the country. He has also published two books with OBE and has received a lot of critical acclaim. But my interest in Chris was specifically about his time with one of the most recognized journals in America: The National Enquirer. I know Chris and know his writing to be excellent, so I was curious as to what he had been doing at an outfit that receives little respect and is considered "tabloid journalism."

I had five burning questions for Chris that I think almost anyone would have about The National Enquirer, but I am the only one who was brazen (or just downright rude) enough to ask him. His answers surprised me and reminded me yet again of the gap between assumptions and facts.

1.  Where and how did you come up with the ideas for stories? I mean, did you sit around a conference table and someone just blurts out, “I think Michael Jackson may still be alive and living in Des Moines!”

The Enquirer was such an enormous success that it became the generic name for any outlandish tabloid. Most of the really ridiculous headlines came from the great (and Enquirer-owned) Weekly World News. They had ones like, “Baby Born With Wooden Leg!” and “Factory Haunted by Farting Ghost!” The Enquirer never dealt with that stuff. That’s the biggest misconception about them. In fact, they’d never do a story like MJ is alive. The knock on them was they did Elvis was alive stories, when it was one of their biggest scoops to get a picture of The King in his coffin. With celebrities, it was checkbook journalism and old-fashioned shoe leather reporting. I’d encourage people to watch “The People Vs. O.J. Simpson.” The New York Times said the National Enquirer was “The Bible of Simpson coverage.” Enquirer reporters were essential in finding overlooked evidence that led to Simpson losing the civil case that became his ruin. I came up with offbeat true features by subscribing to ten newspapers from around the country and daily looking for odd news involving real people and places.

2. Okay, so everyone knows that the stories are not real, right? I mean, yes, sometimes you have a legitimate scoop, but, I mean, Japanese space crafts attacking Hawaii?

Wrong! That’s a photoshopped page. Somebody’s again using the generic name to maximize impact. Here’s an example of a truly wild and true story: Harold Deal was struck by lighting and never felt cold again. I persuaded him we’d do a straight story about his unusual condition. And we did. Very factual. No jokes or foolishness. My editor said, “Good, now ask Mr. Deal if he’ll let us photograph him in the penguin hutch at Sea World with ice and penguins all over him.” Geez. I called him back and said, ‘Remember that serious story? Well…” and made the proposal. He said okay! And we ran this great serious medical story with that eye catching picture under the headline, “Hell will freeze over before Harold Deal does!”

3. How does the paper not get sued every day for printing such salacious stuff about celebrities? I mean, it can’t be all true, so is it in the wording of the articles that basically allege things without saying for certain if they happened?

When I was working there through much of the ‘90s, they had a top D.C. law firm that had just two clients: the National Enquirer and Bill Clinton. This was during the impeachment trials and associated scandals. That’s how good their top dollar attorneys were, and they would read and vet every single story. Often celebrities would sue them with a big splash and then quietly withdraw the suits when no one was looking. Some were settled, but more often than not, the National Enquirer was right. In recent years, they are the ones who broke the stories about Tiger Woods, Rush Limbaugh’s drug problems, and VP candidate John Edwards' love child.

4. You are a legitimate writer and journalist and have written for some of the most established magazines and publications in the country. Is the National Enquirer actually full of established journalists? If so, why aren’t they elsewhere more “legitimate”?

I’ve enjoyed working both sides of that fence and if I had to pick one, I’d go back to Enquirer. I quit doing them because I’d done more than 1,000 stories — often four a week — and it was very demanding. But Enquirer editors were some of the best, most creative and joyful journalists I’ve ever known. They truly craved finding the best true stories and putting a humorous or dramatic spin on them. It made me so much better. In fact, many of the stories I eventually wrote for Esquire, Playboy or Maxim first came to my attention as Enquirer stories. They stories were the same. They were just told in ways that fit each publication’s readers.

5.  What was it like to work there? Were people proud of it or did they hide it? Were you treated well and paid well?

It was a joy. It was not uncommon for freelancers like me to earn up to $1,000 a story that would take just four hours to do. The best was coming up with wacky ideas that would get all America talking. I remember in ’96, there was a TV special about Elvis’s cooks. They showed them preparing all the meals fit for The King. It was pure gluttony. I sent my editor a lead, “Enquirer reporter eats like Elvis!” They said they’d pay me $1,000 if I could gain 20 pounds. So I got the Elvis cookbook, Are You Hungry Tonight?, and went to town. I got calls from radio stations all over the country and will never forget sitting next to a woman on an airplane who was reading that very story. Boy, did we have a fun talk.

Other journalists from mainstream publications would often sling us for the work, but I’d contend that if you got in the business of storytelling what would you rather be doing: wacky fun or sitting in on county municipal authority meetings?