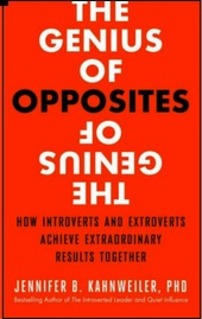 In Jennifer Kahnweiler's new book, she discusses how opposites can make unlikely allies and partners and how best to manifest and preserve such relationships. Jennifer specifically focuses on introverts and extroverts and how they can get along, but history is full of strange partnerships between opposites of all kinds.

1. Mario Cuomo and Rudy Giuliani: Cuomo was running for a fourth term as the Democratic governor of New York in 1993 when Republican Rudy Giuliani announced that he was backing Cuomo instead of his fellow Republican George Pataki. The reason? Both Cuomo and Giuliani hated then-Senator Alfonse D'Amato--Pataki's close friend and ally. Giuliani felt that D'Amato didn't need any more friends in government, and Cuomo agreed. The lesson here being that nothing unites two opposites quite like a disdain for a third party.

2. The Teachers Unions and The Tea Party: The strongly liberal teachers unions have joined forces with the staunchly conservative members of the Tea Party. What unifies them is a shared disdain for government interference--in the case of the unions, they don't appreciate federally-mandated educational standards and styles--specifically Common Core. In the case of the Tea Party, well they just don't want anything federally mandated at all. The lesson here is that opposites can unify under a common goal or desired outcome.

3. Jim Jones and Harvey Milk: A partnership between the man responsible for the deadly Jonestown massacre and one of the most revered political activists of the previous century definitely makes for an intriguing study. What drew Milk to Jones was Jones' ability to unify a people and bring them together. Jones' statement, "Take one of us, and you must take all of us" resonated with Milk as he tried to unify his community for gay rights, and he told Jones as much. Jones' temple assisted Milk with his campaigns and Milk publicly supported Jones. The lesson here is that a common philosophy can unite two opposites--even if their interpretations of said philosophy differ vastly.

4. Hunter S. Thompson and Pat Buchanan: Thompson's distaste for Nixon was legendary, which made it all that much stranger that he considered one of Nixon's closest advisors--Pat Buchanan--a friend. Thompson said and wrote on several occasions that he admired Buchanan for his dexterity with language and his ability to communicate. The lesson here is that when it comes to Hunter S. Thompson, nothing makes sense.

5. George W. Bush and Ted Kennedy: This unlikely partnership began in 2002 when both Bush and Kennedy came to a shared understanding over a 2002 educational bill. Though Kennedy strongly disagreed with Bush's actions regarding Iraq, Hurrican Katrina, and various tax cuts but they remained as partners who worked together on issues such as education and immigration. Bush even publicly said, "I actually like the fellow!" The lesson here is that opposites don't neccessarily have to like everything about each other to be able to work together.