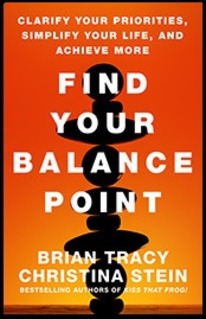 In their latest book, Brian Tracy and Christina Stein talk about how we need to achieve balance. Everyone today has too much to do and too little time—that’s not going to change. The only way to make our lives less stressful is to make sure we spend more time doing the things that matter most and less time doing the things that matter less. When we’re not clear on what is really important, we make thoughtless and impulsive choices and end up feeling exhausted and unfulfilled.

Here are five individuals who went to drastic lengths to find their balance--and did so with great success:

1. Irish billionaire Chuck Feeney established a $7.5 billion empire by establishing a number of duty-free shops internationally. At the age of 50, Feeney was not satisfied and decided that what would be most fulfilling to him would be to give away the money he had made to others instead of just making more money. He has, to date, given almost $7 billion to groups and organizations engaged in education, science, healthcare, aging and civil rights in the U.S. Australia, Vietnam, South Africa, and Ireland. In 2016, the last of his billions will be spent, and in 2020, the foundation he established to give away the money will shutter its doors having completed its mission and having no money left to give.

2. Eighty-one-year-old Croatian music teacher Frano Selak is considered one of the luckiest men in the world. He not only escapted death seven times (including falling from a plane in addition to incredible car and train accidents) but also won $1 million in the lottery. At first, he celebrated by buying a new home, but then reconsidered when he realized how none of his winnings would have ever saved him from death the way God had. What mattered to him was living, not spending, he realized. Selak sold his new home and took the proceeds from that as well as what remained of his winnings and gave it away to his loved ones and family. He moved back to his modest home in a small town. The only money he kept was just enough to pay for a hip operation for himself so that he could continue to move and keep working.

3. Millionaire Jon Pedley was a freewheeling millionaire and playboy until a 2002 car accident left him comatose and on the verge of death. He felt that being saved was an act of God and that his life thus far had not done much to honor his faith. Pedley gave away all his money and property, and moved to a mud hut in Uganda to start a charity for local orphans. Pedley has reportedly not had a single regret about his decision and feels strongly that he regained his balance by realizing that he should serve god and others rather than himself.

4. Chinese real estate magnate Yu Panglin grew up in poverty and hardship and felt strongly that it is what we endure in life that gives us character and teaches us the value of things--lessons he carried with him and served him well as he built his empire. What made him successful was the balance between his hard-knock life and his cool business acumen. He did not wish for his two sons to not know such balance and so has given away every last dollar of his personal wealth to charity, leaving his sons nothing and with strict instructions that none of his donations could be given to or inherited by anyone else.

5. Scott Neeson was an executive with Fox Studios in Hollywood and earned a six-figure salary. In 2003, after visiting Cambodia where he witnessed children living in a garbage dump, Neeson decided to give up his luxurious lifestyle and move to Cambodia to set up an organization that helps such children. He actually lives in the organization's offices and has no real "home" of his own. Neeson has admitted that he misses some of the trappings of his former life, but would still not trade what he has found for what he once had.

These are amazing accounts!  Thanks Jeevan for collecting them and sharing them with us.  I'll share these accounts with others.

A Human Saint
A lot of controversy has been stirred by the recent publication of several of Mother Teresa's personal letters where she confesses to a lack of faith and conviction in her work and her belief in...
Read more...

The Purpose of Life -- According to George Carlin
No one makes it easier to understand what our lives are all about. (Please be warned that the language George uses in this piece, as is the case with all his pieces, is rated PG-13.)
Read more...

A Full Life In Just The Final Third...
Yes, it's an ad, but that doesn't mean it's not clever. Never too late to live the good life!
Read more...