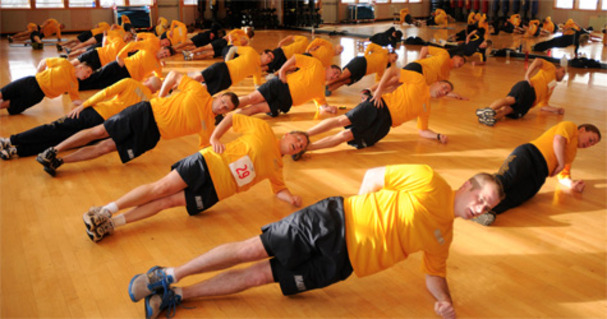 Ken Blanchard and Tim Kearin's latest book is about fitness that is sustainable and permanent, not a fad diet or rapid-loss system that takes its toll on the body and inevitably stops working.

Most people don't stick to their fitness goals due in some small part to the various myths floating around (like old wive's tales) that endorse incorrect (and often damaging) prescriptions. Here are just five of them:

1. No Pain, No Gain.
This phrase was popularized by an exercise machine manufacturing company but it has been adopted as a mantra by countless people. The point is to differentiate between muscle soreness and actual pain. Soreness is common and is a sign of exertion through exercise, but it wears off. Pain, on the other hand, means you've done damage somewhere and if you continue, you're most likely going to do permanent damage -- so stop!

2. Stretch Before Exercising.
Long the standard ritual before embarking on any sort of exercise, numerous researchers have found no scientific evidence to back up the notion that stretching before a workout reduces injuries or lessens muscle soreness. Psychologically speaking, it seems to work only because we are under the impression when we are stretching that we are "easing in" to the workout. That said, there's no harm in stretching either.

3. You Continue Burning Calories Even After You Stop Exercising.
This statement is for the most part just not true. "Afterburn" calories can top out at just 20-30 within a day extra. If you exercise intensely enough to reach the top of your VO2 maximum (the maximum amount of oxygen you can take in during exercise) and continue at that incredibly high level for 45 minutes or longer, you'll burn up to an extra 190 calories even after you stop exercising. Keep in mind, however, that's 45 minutes of sheer exhaustion for basically the calorie count of a tuna sandwich.

4. Running on a Treadmill Is Better for Your Knees.
For years people have believed that running on hard surfaces impacts your knees significantly more than, say, running on the beach -- so a treadmill seems like a solid alternative. But it's not. The real damage on the knees is from the act of running itself much more than the surface you're running on. Any time you lift your leg off the ground and pound it down again puts strain on the knees. This is why cycles and elliptical machines are recommended for people with bad knees.
5. Swimming Is a Total Body Workout Like Running, But Safer.
It is to some extent, but not as much as many would think. Part of the exertion (and calorie-burning benefits) from many types of exercise stem from carrying your own body weight as you move. While swimming does increase your heart rate and tone muscles, the water is helping to support your body weight, so you're not getting as rigorous a workout as you may think.