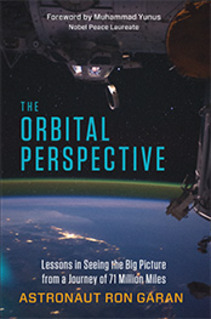 In his latest book, astronaut Ron Garan teaches readers about the need for the orbital perspective -- a way of seeing things in the larger scheme where all things are interconnected and no one thing is without the influence of something else no matter how seemingly removed.

Ron is not the first astronaut to have important lessons for mankind. Here are five other lessons from five notable astronauts:

1. Buzz Aldrin: Emotions get in the way sometimes.
Like most astronauts, Buzz Aldrin was a fighter pilot. He famously said "Fighter pilots have ice in their veins. They don't have emotions. They think, anticipate. They know that fear and other concerns cloud your mind from what's going on and what you should be involved in." Aldrin was not advocating for us to be soulless automatons, but when quick actions are required, human emotions can get in the way of rapid responses to pressing situations. Oftentimes, it is a matter of seeing, anticipating, and acting more than anything else. Essentially, it's about moving from a focus on oneself and one's own thoughts to something that serves a purpose not directly related to one's own self-preservation.

2. Neal Armstrong: We should never look at our achievements within their own contexts but in the larger sense of things.
Being the first man on the moon is quite the accomplishment and yet Armstrong never saw his mission and achievement in such narrow terms. He said, "The important achievement of Apollo was demonstrating that humanity is not forever chained to this planet and our visions go rather further than that, and our opportunities are unlimited." Achievements are not about themselves but emblematic of greater ideas and opportunities.

3. Linda Godwin: Always be thinking ahead of where you are thinking currently.
We have a tendency to look only for immediate needs and goals, but Godwin once explained the importance of thinking long-term by saying, "It's important to know that we packed right, because it is a safety issue for coming home." Most people think in terms of a goal as just reaching it, but equally important (especially if you're in outer space) is being aware of what comes next and what resources that requires.

4. Shannon Lucid: Always push for what you want no matter what others tell you.
Shannon Lucid has always been candid about her struggles getting into the space program as a woman: "Basically, all my life I'd been told you can't do that because you're female. So I guess I just didn't pay them any attention. I just went ahead..." She also said, "It was just really, really tough getting anything when you were a female. Basically, I just took advantage of everything I could..." Lucid fought every step of the way to make it to where she is despite what others told her.

5. Edgar Mitchell: Develop a global mindset and realize that our differences are petty and that a global consciousness can unite us.
Edgar Mitchell is certainly one of the most spiritual astronauts that ever existed but he said the transformation for him happened in space: "You develop an instant global consciousness, a people orientation, an intense dissatisfaction with the state of the world, and a compulsion to do something about it. From out there on the moon, international politics looks so petty." Mitchell has gone on to become a powerful voice in various spiritual communities globally.

The unmistakable lesson that all of these astronauts also endorse is one that Ron Garan is talking about in this book -- the need for a bigger mindset that moves away from immediacy, shot-termism, and narrow, overly-focused thinking and instead moves towards...the orbital perspective.

I especailly identifed with Edgar Mitchell's comments, and see how this orbital worldview would be experienced as an awakening or epiphany. I hope to travel into space before I die as well, but the price better come way down from the current $250,000 per visit before I can partake.