Five Instances Where People Reimagined Their Work with Amazing Results 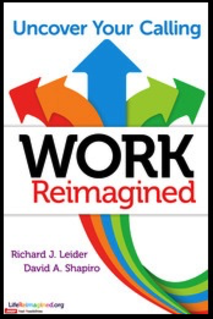 In their latest book, Richard Leider and David Shapiro talk about the importance of reimagining our work--to align our jobs with our passions to bring us fulfillment. Essentially, this is about doing work that doesn't feel like work but is a part of your life's deeper purposes.

Here are five people who reimagined work in a big way, and with a lot of success:

1. Adam Lowry and Eric Ryan:  Lowry was a climate scientist and Ryan was in advertising when they met. Both of them were  filled with a passion for having greater impact on the environment than just talking about it or conducting research, and so they launched an environmentally friendly cleaning product company called Method. Reimagining their work to walk their talk wasn't easy and included maxing out their credit cards and hitting relatives up for loans to scrape together the $200,000 they needed to start the company. Now, with over a hundred products, the company grosses more than $100 million annually.

2. Shep and Ian Murray: The Murray brothers both had corporate jobs in Manhattan that they despised. They much rather preferred to be at the beach. In 1998, figuring they just couldn't hack it any more, the brothers maxed out their credit cards and borrowed money to start Vineyard Vines. The idea itself was odd. The brothers were tired of wearing business suits and longed to wear casual clothes and live in Martha's Vineyard, and they planned to finance this life by selling ties. Yes, the brothers would sell ties so that they wouldn't have to wear them. Such a wacky reimagining of their work paid off and the company today has its own 18 freestanding stores in addition to selling in about 500 other retail stores nationwide. Oh, and now they sell a whole lot more than just ties, and sales exceeded $100 million in 2011.

3. Kim and Beaver Raymond: This husband and wife team was working in the fashion industry when they hit upon their big idea. Being creative, fun sorts, in 2002 they decided that they were going to build guns that shot marshmallows for their son's birthday party. The ensuing happy chaos at the party and incredible popularity of the shooters convinced them that they would rather be doing something fun for themselves instead of working in an industry for others. So they both quit their jobs, figured out how to mass-market the marshmallow shooters they had made, and established the Marshmallow Fun Company. They enjoy over $7 million worth of sales annually.

4. Dana SInkler and Alex Dzieduszycki: Dana and Alex both worked for star chef Jean-Georges Vongerichten at his four-star restaurant, Lafayette, in New York, but soon figured they wanted to strike out own their own. At first they worked to set up their own catering business but they envisioned doing something more. Influenced by the chefs they had met and worked with, the pair were eager to create their own signature dish instead of just recreating others' and started experimenting by frying and seasoning different vegetable roots in Sinkler's apartment kitchen. The results were amazing and Terra Chips was born. The company was sold in 1998 when it enjoyed $23 million in annual sales.

5. Mary Ellen Sheets: Mary Ellen's sons started doing odd jobs for neighbors in the early 1980s by using their pickup truck to haul trash and move furniture. Once the boys went off to college, people still kept calling the house asking for help with moving or hauling. Since most people were familiar with the operation (two men and a truck), Mary Ellen reimagined the "product" and just hired two men in place of her sons and took a commission from the jobs they took while running the operations. The idea took off and Mary Ellen soon found that a lot of people were attracted to the simple idea behind "two men and a truck" and demand was growing. Just like how it was when her sons did it, Two Men and a Truck sounded small, family-owned, trustworthy, and dependable. Mary Ellen decided to franchise the operation. Today, Two Men and a Truck has 224 locations in 34 states with over $220 million in sales.