Five Geniuses Who Were Procrastinators 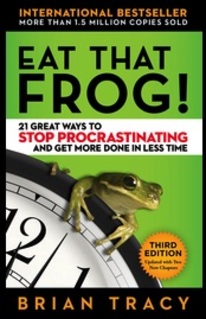 In the latest edition of Eat That Frog!, Brian Tracy presents even more effective ways we can stop procrastinating and get things done efficiently and quickly.

And if you think that you're the only one who procrastinates or can't use time effectively, then you are in for a surprise. Here are five geniuses who were or are notorious procrastinators:

1. The Dalai Lama is spiritual leader to millions of Buddhists worldwide and a tireless advocate for human rights and justice, but he has confessed to being a procrastinator at heart. He used to be quite the slacker when it came to his studies and would only put in effort at the last minute.

2. President Bill Clinton was so bad about meeting deadlines and getting to appointments that his own VP refered to him as "punctually challenged." His White House staff had to plan for his state of the union addresses six weeks in advance to make sure it was actually ready in time.

3. Frank Lloyd Wright may have been a genius architect but he wasn't exactly the best time manager. Despite his protestations to Edgar Kauffman that he had begun work on his new house, Lloyd Wright had not actually drawn a thing despite it being a few hours before Kauffman was to arrive to inspect his work. Wright drew up some quick plans for a new build within a few hours which turned into the magnificent Fallingwater, one of the most famous houses in the world.

4. Leonardo Da Vinci has a reputation for prodigious output of art and sculptures but the reality is that he started many projects but never finished them. The Mona Lisa took 16 years to complete, and the even bigger Virgin of the Rocks was only ready after 13 years. His benefactor had to threaten him with bankruptcy to inspire him to finish a commissioned work. Even now, many of the pieces that we know and love remain unfinished, all thanks to Da Vinci’s penchant for procrastination .

5. Margaret Atwood readily confesses to a procrastinatory spirit. Yes, she has 14 novels, 15 volumes of poetry, 7 children's books, and 11 short story collections under her belt, but, according to Atwood herself, she is a serious procrastinator who is not at all good with deadlines. Her favorite distraction from what she needs to get done? Movies.

The Source of the Interview
And now we trace the origins of the modern job interview.
Read more...

A Useful Speech
Most people can't recall their college commencement speaker's speech -- and with good reason. Commencement speeches tend to be rather uninspiring and impractical. Inevitably there is some...
Read more...