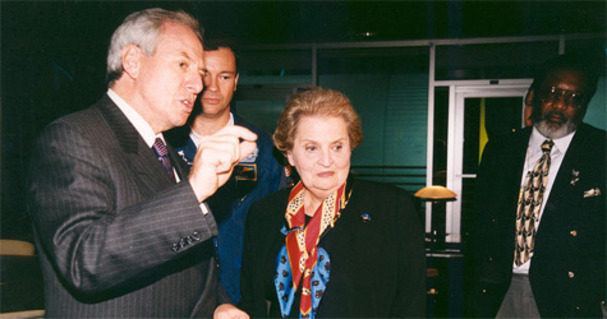 Image Credit
In her new book, author and highly successful businesswoman Joyce Roche addresses how many successful leaders -- especially women -- suffer from the Impostor Syndrome where they feel undeserving of their accolades and achievements and actually question their competence.
This has been a factor for all great leaders throughout history. Here is a list of just five world-famous women leaders who each dealt with their own version of the syndrome and questioned their competence despite overwhelming evidence to the contrary:
1. Mother Teresa (1910 --1997): An icon of God's work on Earth, Nobel Prize winner, and global symbol of compassion, she was also, as was recognized after her death, unsteady in her faith. In letters she wrote to friends and others, Mother Teresa questioned her ability to perform or minister to the needy because she had no faith and confessed to feeling "Repulsed, empty, no love, no zeal." She felt she was a hypocrite and possibly an atheist who was doing the work of a God who did not exist.
Despite her reservations, she never stopped working and caring for the poor and diseased until the end. Her work is even more inspiring and heroic given how she questioned herself so sharply but remained committed to her work.
2. Golda Meir (1898 -- 1978): She was the fourth Prime Minister of Israel and remains a legend to her people as well as admirers globally for her leadership of a troubled nation. She enjoyed an illustrious political career in service as Israel's Labor Minister and Foreign Minister prior to taking on the role of Prime Minister in 1969. Israel won its six-day war against Egypt, Jordan, and Syria and grew prosperous under her government, but the Yom Kippur War just a few years later impacted Meir greatly. Though Israel went on to win the war, with the U.S.'s assistance, the government was severely criticized for its alleged unpreparedness. Much of the blame was directed towards Meir.
Insiders reported that Meir questioned her capability to govern following the end of the Yom Kippur War despite her previous successes. Seeing the people's sudden turn as a reflection of poor leadership, she resigned from government. Many scholars have argued that Meir's decision to resign was too radical and self-critical given the sum of her achievements prior to the war. She remains to this day the original "Iron Lady" of world politics (well before Margaret Thatcher earned the moniker).
3. Madeleine Albright (1937 -- ) Though she was the first ever female Secretary of State and had numerous achievements to her credit, she was dismissed as politically correct window dressing for the Clinton administration upon appointment. Albright's battle with naysayers in government took its toll on her marriage as she felt unworthy of also being a wife and mother. At one particularly low point (as she relates in her memoir, Madame Secretary), she tolerated a husband who had openly taken up with a younger woman but called every day to complain how he could not choose between her and his new lover. So low was her image of self that she even conceded to her husband's plan as to how he would choose between the two: "If he got the Pulitzer, he would stay with me. If not, he would leave and we would get a divorce."

Albright recognized later (after they divorced) just how much she lacked confidence in herself as a spouse to even have allowed such a scenario. She uses this story often to illustrate how ascending to power can often cause women to question their competence and ability in other arenas as well.