Five Famous People Who Refired Themselves Out of Retirement 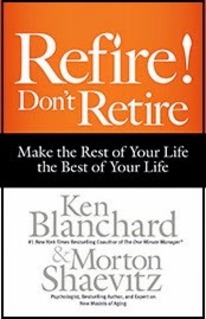 In Ken Blanchard's latest book with his coauthor Morton Schaevitz, he explores the concept of refiring -- that is, how to live a more vital and energetic life in the post-retirement years.

There are countless people who un-retired themselves and went on to have vigorous and healthy second acts. Here are just five:

1. Frank Sinatra
Old blue eyes decided to call it quits in 1971 at the age of 55. However, his fan base was rather disappointed and continued to rally for his return. So, Sinatra did return just two years later in a television special. The TV special was so successful that he decided he would keep at it until the mid-1990s.

2. Clint Eastwood
This man has refired several times -- first he was an A-list actor, then he retired and went on to become the mayor of Carmel, California, and then he started directing and making films. He came out of retirement yet again as an actor in Robert Lorenz's "Trouble with the Curve."

3. Sugar Ray Leonard
In 1982, Leonard suffered a detached retina that was supposed to sideline him permanently. The problem was that Leonard just kept refiring. When he finally hung up his gloves for good in 1997, Leonard had retired and refired four times.

4. Stephen King
The famous horror-writer announced in 2002 that he was retiring due to the pain he continued to suffer from a 1999 accident. Despite the pain, he couldn't quite keep away and decided to take up writing again and has published more than a dozen novels since his announcement.

5. Michael Jordan
The retirement-refirement story almost everyone knows: In the fall of 1993, Jordan left the Chicago Bulls -- whom he had led to three straight NBA titles -- to pursue a career in professional baseball. When that didn't work out, he returned to the Bulls in Spring of 1995 to lead the team to three more championships. He retired again in 1999 but then made yet another comeback ion 2001 to play two seasons with the Washington Wizards.

Leadership for High Performance in a Self-Organizing World