Five Examples of the Damage Done by "Good" Technology 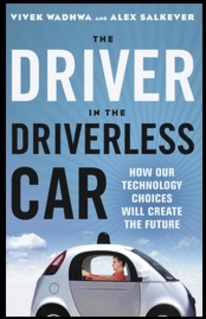 Vivek Wadhwa's latest book discusses how technology is not always the savior and the answer most people assume it will be. As is the case with all things, technology comes with possible blind spots and dangers which if not recognized and acted upon early on, could prove to be detrimental to us both physically and psychologically.

It is never the intention of those who create new technology to also create new dangers or problems, but some of the biggest advances in technology have also brought with them a slew of challenges and problems. Here are just five:

1. Hands-free technology and cel phone use while driving: David Strayer at the University of Utah used a driving similator to put people with a blood alcohol level of .08 behind the wheel to test their reactions and speed. A few days later, he tested the same people sober, but on a hands-free cell phone. The results showed that speaking on a cell phone--even hands free--was as dangerous as driving with a blood alcohol level above legal limits. It's not so much fiddling with buttons that puts you at risk, but rather that the conversation itself engages parts of your brain that would be better focused on the road.

2. High-speed laser printers. Remember the old printers and how it would take them ages to just print out a single page? Today's laser printers are much faster and able to generate more than a page a second at the higher end. But these sleek machines also contribute to indoor air pollution. Some models of laser printers shoot out ultra-fine particles which can, if inhaled, lodge deep in your lungs. Not every printer is a health hazard, and printers that emit a large number of particles are required to indicate as much to the consumer. The problem is measuring how much is being emitted and at what range those particles are dangerous and require consumer notification. In one study of 62 printers, 40% of those tested emitted  a large number of particles, but only 17 printers were indicated to consumers as high-particle emitters.

3. Laptops. With wi-fi being everywhere and portable technology being every bit as good as desktop computers, more people are now using laptops than desktops. But men who work with laptops on their laps may be hurting their reproductive chances. One 2011 study found that men who were exposed to electromagnetic radiation from laptop WiFi for several hours a week had sperm with DNA damage and decreased motility. And it’s not just the laptops doing the damage. A recent meta-analysis of past studies, led by researchers at University of Exeter, U.K. suggests that men who store their phones in their pants pockets risk exposing themselves to radiation levels that may also lower sperm levels.

4. A constantly connected world. At first it seems a tech paradise: we are almost constantly and consistently connected at all times and able to retrieve information and interact with others regardless of where we are and what we are doing. However, research shows the technology we process each day is actually rewiring our brains, between the multitasking and the addiction we feel when we’re without it. “We are exposing our brains to an environment and asking them to do things we weren’t necessarily evolved to do,” Adam Gazzaley, a neuroscientist at UCSF medical school, told the New York Times in 2010. “We know already there are consequences.”