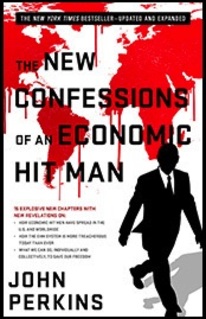 In his latest book , John Perkins revisits his economic hit man past and goes into greater detail around the machinizations and motives that drive hit men. Perkins also explains how hit man activity occurs all over the world to this day and lists several hits that took place between 2004 and now.

Here are just five examples of very recent hit man activity involving economic clout and power being used to exploit entire populations for the financial gains of an elite few:

1. Eric Holder Rejoins His Buddies: Holder retired from his position as US Attorney General to rejoin Covington & Burling, his former law firm. C & B's client list includes Bank of America, JP Morgan Chase, Wells Fargo, and Citigroup. All these banks are also the clients that Holder refused to prosecute for their role in the financial crisis. Coincidence? Nope. Read more here .

2. The World Bank Isn't: The World Bank sounds like a noble idea--after all, it's about helping the whole world, right? Not exactly. The World Bank actually serves the interests of a select few who make all the decisions about where the money goes. Fact: 185 countries jointly "own" the World Bank but only representatives from eight countries serve on its governing board-- the U.S. Japan, Germany, France, the UK, China, Russia, and Saudi Arabia (i.e. the who's-who of global power). The President of the World Bank has always been an American. Read more here .

3. US Corporations and Offshoring: You often hear election-year rhetoric about taxes and how taxpayer funds should or should not be given to various organizations. But what you don't hear about is the $200 billion in corporate taxes that U.S. companies avoided paying by keeping their money in offshore banks. Think about that for a moment: $200 billion. Imagine what that can do for national healthcare, education, welfare, etc. without even touching a cent of individual taxes. Read more here .

4. Suing Entire Nations: Companies can buy national debts of other countries and then try to squeeze more out of them. That's what Grace Church Capital from the Cayman Islands did--they bought a chunk of Cameroonian debt for $9.5 million and then sued the nation for nearly $40 million. Sconset bought $15 million of debt and then sued for $67 million. Not to be outdone, Antwerp (based in the US Virgin Islands) purchased $15 million of debt but is now claiming $196 million owed. Cameroon ranks 150th on the U.N. Human Development Index. Read more here .

5. From Jackals to Businessmen: SEAL Team 6 is mythologized for its taking down of Osama Bin Laden and other foreign leaders but they also have an entrepreneurial thread running through them. These military professionals who work in clandestine operations also go on to establish their own private security companies. Despite what is often hard to mistake for anything but outright criminal activity (such as those perpetrated by Blackwater), these security firms are rarely prosecuted or even investigated due to their founders' connections to powerful government allies. James Bond is a fictional character, but these guys literally have license to kill. Read more here .

Brilliant. Brave. And beyond belief. Now I must get the book to find out how to fight back! The big five banks can pay literally billions for illegal acts and yet no one goes to jail. Can we "little people" actually have any power? Even if Bernie Sanders were to get elected- a Republican Congress will stop him at every turn.  Heavy heavy sigh.

A Game As Old As Empire

Hit by the Chamber of Commerce’s Economic Hit Men
NOTE: I will be teaching at the Omega Institute this summer. I’ve been interviewed by lots of journalists in the past month in response to the Panama Papers disclosures. A question I often get...
Read more...

Five Examples of Disastrous Project Management
Do we really need project management? Or if we all did the work we were supposed to do, maybe we wouldn't need to coordinate things? Yeah, that's wishful thinking. The following examples prove why...
Read more...

Five Examples of How Conflict Creates Innovation
Jeff and Staney DeGraff's latest book, The Innovation Code, explores how innovation is often a result of conflict, not harmonious flow. Look carefully at a successful company or community and you...
Read more...

How To Organise A Global Book Tour
As a first time author, I didn't know much about the publishing industry. My publisher, the brilliant Berret-Koehler did their part in disabusing me of my vague, second-hand notions of how...
Read more...

Global Workforce Management. Why and How?
For a long time, the organizations in the United States, Europe and other developed economies, were able to grow serving domestic markets. This started to change with economic slowdown in their...
Read more...

Field Operations are Still Key in the Land of Big Data
New Orleans     Sitting around a barbeque grill in Missoula, Montana recently,  I found myself in a mini-debate with a former political science professor at the University there who taught Jim...
Read more...

MAD For Global Justice
In 1999, I flew cross-country with five of my Boston College undergraduate and graduate students to participate in the legendary Battle of Seattle, a huge protest against corporate-driven...
Read more...

Five Examples of the Damage Done by "Good" Technology
Vivek Wadhwa's latest book discusses how technology is not always the savior and the answer most people assume it will be. As is the case with all things, technology comes with possible blind spots...
Read more...