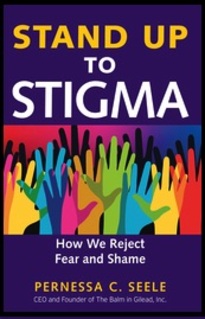 In Pernessa Seele's new book, she addresses the importance of confronting stigma so that people are not unfairly maligned or banished to darkness because of fraudelent "societal standards."

One of the most common stigmas is the one associated with mental illness--something that has remained in the shadows for many years because those with mental illness or depression were viewed as "flawed" or "damaged" somehow. However, a recent crop of celebrities have come forward (or their loved ones have) to admit that not only do they suffer from forms of mental illness, but that awareness for others along with compassion and understanding is a must.

Here are just five of those celebrities:

1. Jane Pauley: The noted news anchor has opened up about her battle with bipolar disorder.

2. Buzz Aldrin: The famed astronaut may have conquered the moon but he still falls prey to bouts of intense depression.

3. Vaslav Nijinsky: Perhaps one of the most famous dancers of our time and the man who opened the doors for others such as Nuruyev or Baryshnikov suffered from schizophrenia for much of his life.

4. Ted Turner: The billionaire and founder of CNN suffers from bipolar disorder and openly talks about it and how he has almost committed suicide before.

5. Lady Gaga: Perhaps one of the biggest stars alive today is also candid about her fight with PTSD.