Five Amazing Facts About the Laws of Nature 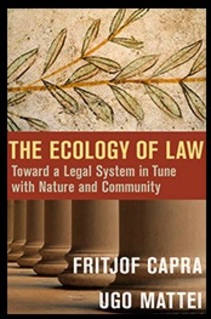 In their latest book, authors Fritjof Capra and Ugo Mattei discuss how our laws are at odds with natural law. This work outlines the basic concepts and structures of a legal order consistent with the ecological principles that sustain life on this planet.

1. The laws of nature conform to mathematics. Is that a strange thing in and of itself? More than you realize, actually. Mathematics is ordered and follows certain rules, but there is no reason why nature or the universe should follow such rules. How can something that was created so haphazardly and randomly be so precise and consistent? All life can be expressed in mathematical equations. Nobel Prize winning scientist Richard Feynman said, "Why nature is mathematical is a mystery...the fact that there are rules at all is a kind of miracle."

2. Survival is always a collective effort. Wherever there is life, there is always a complex ecosystem that consists of separate classes of organisms that are crucial to one another's existence. Nothing can and does live in an isolated or simple system. There is actually no such thing as a simple system. All eco-systems--even the seemingly simple ones (a plant in the desert, for example)--are deep and complex and provide the capability for multiple forms of life to coexist and support one another. Given that it is easier to have a simple system, how even a single cell organism is an integral part of a larger system is an amazing act of complex orchestration.

4. There is no greater equalizer than death and ironically, no greater instrument of progress either. Philosophers have actually argued the fact that nature has created an equalizer that is beyond anything we could have created: death. All living creatures die (with the exception of some very primitive forms of jellyfish). Whereas there are variations in strength, intellect, prowess, and even station in life, all of those do not necessary shield anyone or anything from death. Furthermore, someone who has a great deal of wealth or strength can still die young while someone who has little and lives poorly can live to an old age. Death is the one factor that nature created that cannot be undone, remains unpredictable, and is completely unavoidable. Apart from just being an equalizer, this ensures that there is always something new to replace the old, and that we will continue to grow and change and adapt. It's the perfect cycle that contradicts itself beautifully: all living things must die in order for life to go on.

Wow!  There is a lot to chew on in your post here.  Jeevan, you've given us a graduate course in science in two pages.  And this new book by Fritjof Capra and Ugo Mattei is one of the most important books on which I've ever worked as editor.  The Ecology of Law has huge implications for the changes that are needed in our legal structures and economic systems to create a world that works for all.  Steve Piersanti

AFFLUENZA -- THE MOVIE!
Here in its entirety is the award-winning PBS documentary that launched the book and the movement. At first, you may feel that this film is a bit outdated, but watch for long enough, and it becomes...
Read more...

How Comedy Influences Politics and Thinking
Late night comedy shows -- especially those with a news-show parody approach -- are more than just entertainment. Research shows that while people do consider such programming to be entertainment,...
Read more...

Hayek Vs. Keynes
This video uses a rap-video parody to explain how John Maynard Keynes and F.E. Hayek differed on the economy and spending. It's catchy, it's hilarious, and most importantly, it's thoroughly...
Read more...

Enough!
Excess is not just about resources but everything -- including weapons. What is the point of this large of a nuclear arsenal? The wasted effort is so evident when one considers that the entire...
Read more...

If I Wanted America to Fail
A stunning (and, let's admit it, pretty convincing if you didn't know the facts) viral video by Free Market America that was timed to be released during Earth Day 2012 attacks sustainability...
Read more...