May Jobs Report, first impressions: Another solid report, outside of manufacturing (and that’s due to the strong $) 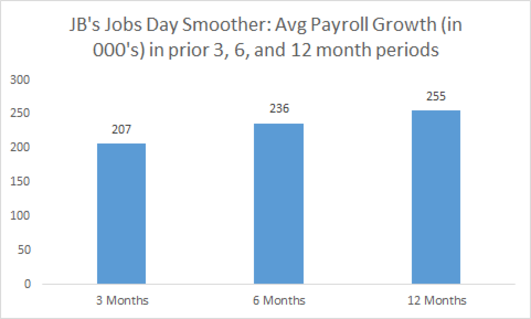 Payrolls were up 280,000 last month in a better-than-expected jobs report, with employers adding jobs across almost all of the service industries and government. Positive revisions for April and May added another 32,000 to the payroll count. Analysts had been expecting around 225K jobs, so put May’s initial print in the “upside surprise” column.

The jobless rate ticked up slightly from 5.4% to 5.5% but for the right reason: more people joining the labor force (in fact, the increase—from 0.0544 to 0.0551—was statistically insignificant). An important metric here is the labor force participation rate, which ticked up to 62.9%. While that’s a tick in the right direction, the LFPR has been hovering closely around 63% since late 2013, about three percentage points below its pre-recession peak.

Given today’s working-age population, three percentage points is over seven million potential workers. Many—most, by some measures—of those “missing workers” are aging boomers leaving the labor force for retirement. But as many others—I’d guess a third to a half—are potential workers who could get pulled back into the job market as it tightens up.

As usual, in order to get a better feel for the underlying trend in net job creation, the smoother chart below looks at monthly averages over 3, 6, and 12 month intervals. Over the past three months, payrolls are up about 200,000 per month, a slight deceleration over the longer term trends.

I suspect this slowdown reflect some underlying headwinds in the broader economy. One salient connection here is the stronger US dollar, up 18% over the past year against the currencies of our trading partners. By making our exports relatively more expensive, the stronger dollar makes it tougher for our manufacturers to compete in foreign markets.

The second figure plots the monthly change in factory jobs against the rising dollar. Last year, we added about 18K a month in the sector, on average. This year, we’re bouncing along the bottom—the average gain over the past three months is only 3K. Average hourly wages were up 2.3% over the past year, a touch faster than in past months. However, measured on an annualized, quarterly basis, hourly wages are up 2.9%, a notable acceleration. This metric, it should be underscored, is noisier and thus less reliable than the year-over-year measure, so we’ll have to see if a true acceleration is really underway. If so, that would be long-awaited good news for the majority of working-age households who depend on paychecks.

All told, May delivered another in a series of solid jobs reports, suggesting that the US labor market continues to expand and providing another data point that discounts the 0.7% drop in first quarter GDP.

While wages may be finally responding a bit, from the perspective of the Fed and their nascent tightening campaign, there are a few things to consider. First, there’s still slack in the job market, as noted in the LFPR discussion above, not to mention the still elevated number of involuntary part-timers (6.7 million in May). Second, the strong dollar is both anti-inflationary, and, as noted, a drag on growth in a key sector (and remember that a rate hike would further boost the dollar’s value). Third, inflation remains extremely quiescent. Fourth, based on the Fed’s 2% inflation target and the underlying productivity growth rate of around 1.5%, hourly pay could rise by 3.5% and still be non-inflationary (if you consider the need to rebalance the compensation share of national income, as I do, wages could even grow faster than that for awhile).

What I see in these numbers is a job market that’s maybe, sorta, kinda starting to reach working people…six years into the recovery! So my message to the Fed: love it and leave it alone!