Josh Bivens offers sage and timely thoughts on wage targeting at the Fed…just in time for their big meeting! 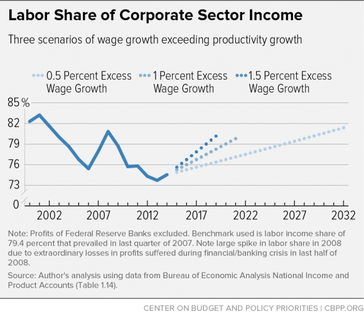 Well, what a coinky-dink! Just in time for the Federal Reserve’s Open Market Committee meeting tomorrow where they’ll be discussing the liftoff date for the interest rate they control, economist Josh Bivens has a smart new paper out on the importance of considering wage trends in the mix, written for our full employment project.

Here, in his words followed by a bit of annotation from moi, is his logic:

[Also, the share of involuntary part-timers remains elevated, so there’s considerable “under-employment” as well. Using Levin’s measure of slack, this and the part Josh mentioned re the labor force would add more than a point to the unemployment rate.]

[Maybe 2-4 percentage points, in terms of a confidence interval around their natural-rate estimates, which is, as Josh says, large. BTW, did you see this? New report from a couple of Fed economists that backs out a “natural rate” slightly north of 4%.]

[OK, this is my fav point, one that I’d like everyone in this debate to either make a big, damn deal out of or explain to me why it’s not a big, damn deal. It’s a bit of a gnarly point but it comes down to this: thanks to job market slack and high levels of inequality, much of the income growth in this recovery has gone to profits, not wages. Another non-inflationary way in which wages can grow—even when they’re growing faster than the 3.5% benchmark Josh identifies—is through shifting some of that growth back to paychecks. In technical terms, it’s the rebalancing of factor shares, and as Josh’s Figure 7 shows, it means there’s considerably more room for wages to grow. EG, with “excess wage growth” 1.0 percentage point above the 3.5% benchmark—so, nominal wage growth of 4.5%–it would take eight years, until 2022, for the compensation share of national income to revert to its pre-recession level.]

I already said “tru dat!” so how about “I feel ya, Josh!” I only hope Janet and co. are listening.