Why Community Organizing is Essential to Rebalance Society 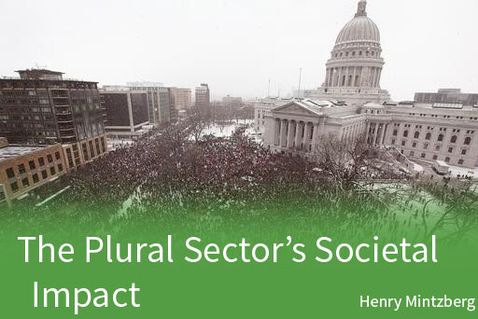 This is an author day blog by a Berrett-Koehler intern, based on Henry Mintzberg's Author Day lunch talk!

Economist John Maynard Keynes describes capitalism as “the astounding belief that the most wickedest of men will do the most wickedest of things for the greatest good of everyone.”Advocates of capitalism claim it achieves an ideal economic state, but how can greed advance society when people constantly crave for more? Will an excess amount of greed result in the wealthiest and most successful placing personal gain over societal advancement?

The environment has clearly suffered since habitat restoration after resource extraction is not required. By voluntarily doing so to benefit local communities, the corporation's profits will undesirably decrease. Greed results in actions that lead to personal instead of communal advancement.

For example, this is seen when an updated smartphone is released. People will often discard their fully functional phones for the newer, shinier version. This results in larger landfills and less resources available for future generations. In Rebalancing Society, Henry Mintzberg explains how exploitative aspects of capitalism have decreased social mobility and weakened the American government, as well as ways to restore a balance of power.

Demise of Democracy and Rise of Predatory Capitalism

The Constitution's outline of a new American system in 1787 eventually resulted in the powerful present-day influence of corporations. To avoid an abuse of power similar to that the British monarchy inflicted upon colonists, checks and balances were introduced to equally distribute power between the executive, legislative, and judicial branch. Checks and balances deliberately weakened the government with the intention of enhancing the liberties given to the people; however, independent institutions acquired the additional influence.

As corporations continue to participate in misconduct by exploiting resources, the government’s attempts to mitigate the damage are rendered futile. Since businesses are given certain human rights, they are allowed to file a lawsuit against a government on the claims that legislation interfered with their profits. These cases threaten to divert federal funds intended for public services to corporations, causing the government to appear inept in satisfying public needs. By attempting to reduce negative externalities produced by businesses, the government can become weaker as more public services are privatized.

Mintzberg emphasizes three sectors required to rebalance society: public, private, and plural. The plural sector, commonly seen as the marginalized sector, consists of non-governmental and non-business organizations that emphasize the people’s role in society. Although the plural sector is often overlooked due to the prominent presence of the public and private sectors, it is still a significant aspect of society.

Greenpeace is categorized in this sector, and with their common interests and collective action, convinced KFC UK and Ireland to stop purchasing from paper suppliers who source from the Indonesian rainforest. Meals on Wheels similarly improves the quality of life in a community, but with volunteers who deliver meals to seniors on a daily basis. Co-operatives and community-based organizations effectively improve society to contrast the greedy aspects of capitalism.

While all three sectors are essential to a balanced society, a concentration of power in one can be detrimental due to the crude aspects of the public sector, crass private sector, and closed plural sector. The public sector’s desire to treat everyone equally can result in crude inefficiency. The private sector can be crass due to the common attempts to increase sales by excluding additional fees and conditions in the advertised price. While the plural sector is composed of individuals with narrow interests, it can be closed since members may not remain open-minded towards the concerns of those outside of their group.

These sectors should instead be equal partners in promoting societal growth, while remaining flexible enough to place a greater focus on one sector when appropriate. For instance, the public sector would excel in providing defense, the private sector in products, and the plural sector in professional services.

Governments and corporations play a necessary role in the solution, but should not be solely relied on, given the current state of imbalance. The plural sector is crucial in spreading awareness of present-day issues as well as introducing viable solutions. A vital part in correcting social injustices is through education by watching documentaries or reading research such as Mintzberg’s Rebalancing Society .

I became aware of the importance of fair trade practices by watching a documentary called Black Gold, which focused on the low wages given to coffee bean farmers in developing countries due to free trade. In order to support fair and safe labor conditions, I now order from cafes that brew fair trade coffee. Similarly, desires to remedy a situation can result in individual actions, and eventually be channelled by joining an interest-based organization and inviting friends to do the same. A movement can be organized to increase awareness, and encourage solidarity in a community to initiate benevolent political, economic, and social change.

Mintzberg writes about how Brazil illustrated the effectiveness of the plural sector with its management of the HIV/AIDS epidemic. By distributing condoms at Carnival and incorporating personal accounts into the media to increase visibility, the amount of Brazilians with HIV or AIDS ended up being half of the World Bank’s projected amount. This movement was successful partially due to their targeted approach. Addressing problems in general increases the difficulty of developing a feasible solution, as seen in Occupy Wall Street. By protesting against a specific unwanted practice, as Gandhi did against the British tax on salt, progress is more likely to be made and catalyze greater action.

While Mintzberg provides the awareness needed to commence a movement, action is required on the reader’s part to rebalance society by spreading awareness and participating in organized movements to obtain the public and private sectors’ attention, and better still, driving changes themselves.