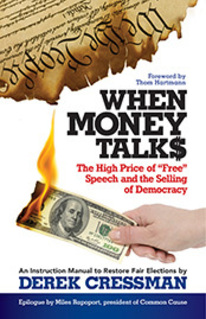 When Money Talks:
The High Price of “Free” Speech and the Selling of Democracy

“When money talks, democracy walks. Read this book to learn how we, the people, can take back our elections from the billionaire and overturn a Supreme Court ruling that is a gross misreading of our constitution.”
— Robert B. Reich, Chancellor’s Professor, University of California at Berkeley and former U.S. Secretary of Labor

There are three things it is said, that should never be mentioned in polite company: money, politics and religion. Well, Derek Cressman who has worked as a director of the state PIRGs’ Democracy Program, and been vice president of the state operations with Common Cause, breaks those rule by speaking openly about how money is what is ruining politics.
In his new book, When Money Talks: The High Price of “Free” Speech and the Selling of Democracy ($17.95, PB original, 240 pages, 5.5" x 8.5", ISBN 978-1-62656-576-0), releasing Winter 2016 by Berrett-Koehler Publishers, author Derek Cressman investigates the power and influence that special-interest money has on the political sphere. Due to the Citizens United decision to do away with campaign spending limits as abridgments of free speech, Derek Cressman gives the American people an answer to the question of how they can stop this travesty. This book gives the necessary tools, both intellectual and tactical, to fight back.
There is nothing inherently unconstitutional in limiting the amount of speech, Cressman insists. It happens all the time- for example the Supreme Court regulates who is allowed to speak before the court and how they must do it, in fact regular citizens are forbidden from speaking. Even in Congress there are time limits for how long members can speak. Moreover, he argues that while we choose to patronize news and political sources like Fox News, MSNBC, the New York Times, or the Wall Street Journal, political advertising is virtually spoon fed to the American audience on a large scale. It is not what the Founders had in mind when they wrote the First Amendment.
Cressman explains how courts have routinely blocked bi-partisan attempts to limit campaign spending, and even goes as far as specifying what a constitutional amendment limiting paid speech should say. Seven times before the American people have had to fight to overturn erroneous rulings by the Supreme Court- there’s no reason it can’t be done again.

When Money Talks explores the dangers to the democratic institution that the Citizens United decision is causing. How the political well being of America is under threat by those who because they have money, are therefore given a voice. The book takes on the task of detailing how to derail this current trend and to bring America back on the right track.

Derek Cressman is a political advocate, who specializes in pushing the Government to be for the people and not for a select few. Cressman has had a long career speaking out against big money running politics and ensuring that speech is not limited to how much money you have. Derek has testified before committees of the United States Senate, California State Assembly and Senate, and California Fair Political Practices Commission; served as an expert in federal litigation; and authored and coauthored numerous reports as well as one previous book, The Recall’s Broken Promise: How Big Money Still Runs California Politics. Derek has appeared extensively in the media, including the Associated Press, Roll Call, The Hill, National Journal, USA Today, the New York Times, Los Angeles Times, Christian Science Monitor, Washington Times, Boston Globe, San Francisco Chronicle, San Jose Mercury News, Sacramento Bee, Atlanta Journal-Constitution, Austin American-Statesman, Orlando Sentinel, Albuquerque Journal, and Kansas City Star.

What People Are Saying

“The movement to overturn Citizens United is turning into a stampede. Derek Cressman is helping lead the way. Read when Money Talks and join the movement.”
—Ben Cohen, Co-Founder if Ben & Jerry’s Ice Cream and head stamper at StampStampede.org

“Cressman’s book is a powerful indictment of Citizens United, and provides thoughtful ideas on how We the People can help restore our democracy.”
—Lisa Graves, Executive Director of the Center for Media and Democracy, publisher of PRWatch.org and ALECexposed.org

“Derek Cressman nails it: Money isn’t speech, it’s power. After the Supreme Court’s folly in Citizen’s United, concentrated money and power is destroying our democracy. But we can save it with a 28th Amendment to the Constitution, and this book shows all of us how. Read it and join this historic work of all Americans.”
—Jeff Clements, Author of Corporations Are Not People: Reclaiming Democracy From Big Money & Global Corporations.

The High Price of "Free" Speech and the Selling of Democracy