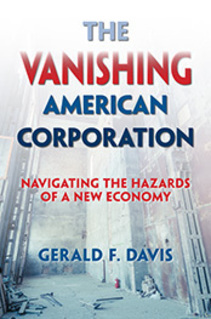 The Vanishing American Corporation: Navigating the Hazards of a New Economy

Is the new Uber sharing economy really the answer?

“Davis challenges the future of the corporation and of traditional jobs in a world of digital disruption and decentralization. The implications are significant, but so are the opportunities. Davis offers us a way to understand the significance of the change and to lead through it. Great insights and inspiration.”
—Jim Hagemann Snabe, former Co-CEO, board member, and Chairman, SAP

It may be hard to believe in an era of Wal-Mart, Citizens United, and the Koch brothers, but corporations are on the decline, says Gerald Davis. The number of American companies listed on the stock market dropped by more than half between 1997 and 2012. In recent years we've seen some of the most storied corporations go bankrupt (General Motors, Chrysler, Eastman Kodak) or disappear entirely (Bethlehem Steel, Lehman Brothers, Borders, Circuit City).

That corporations are vanishing may sound like good news to some, but Davis insists it's not—in fact, it's a root cause of the income inequality and social instability we face today. Corporations were once an integral part of building the middle class. He points out that in their heyday they offered millions of people lifetime employment, a stable career path, health insurance, and retirement pensions.

The businesses that are replacing them can't and won't fill the same role. For one thing, they employ far fewer people—the combined global workforces of Facebook, Yelp, Zynga, LinkedIn, Zillow, Tableau, Zulily, and Box are smaller than the number of people who lost their jobs when Circuit City was liquidated. And the “sharing economy” absolves many companies of any sense of obligation to most of the people who work for them—at the end of 2014 Uber had over 160,000 “driver-partners” in the United States but recognized only about 2,000 people as actual employees.

The Vanishing American Corporation tracks the rise of the large American corporation, its role in greatly expanding the middle class, and the current economic pressures that are making it unsustainable. The future could see either increasing economic polarization, as careers turn into jobs and jobs turn into tasks, or a more democratic economy built from the grass roots.

Gerald F. Davis is the Wilbur K. Pierpont Collegiate Professor of Management at the University of Michigan's Ross School of Business. He has published widely in management, sociology, and finance.

What People Are Saying:

“Jerry Davis offers a gut-wrenching, mind-blowing picture of the Uberized society we are more or less blindly constructing. It raises radical questions for how we should collectively organize and individually navigate this brave new world, forces us to look afresh at how market and government should be allowed to interact, and puts our existing economic and political philosophies to the test.”
—Philip Pettit, L. S. Rockefeller University Professor of Politics and Human Values, Princeton University, and Distinguished University Professor of Philosophy, Australian National University

“This is a brilliant book that describes the evolution of America’s economic ecosystem and the implications of the ‘task-based’ economy for employees and society more generally.”
—Jeffrey Pfeffer, Thomas D. Dee II Professor of Organizational Behavior, Graduate School of Business, Stanford University

“Fast-paced, brilliantly written, and deeply informed. The best overview yet of the rise and fall of the giant corporation, the new technologies, and the opportunities and dangers—personal as well as political—we now confront.”
—Gar Alperovitz, author of What Then Must We Do? and Co-Chair, The Next System Project

“This book is a comprehensive commentary on the history of public corporations in America. It provides an excellent insight on the rising fortunes of these corporations and dwells on their imminent fall. Elegantly paced, it gives glimpses of the social and economic impact of corporations on nations and makes for very good reading.”
—S.D. Shibulal, cofounder and former CEO, Infosys

“Job One for the modern business academic is to provide actionable advice to help businesses create meaningful jobs and contribute to broad economic prosperity. Jerry Davis shows himself again to be a tower of strength in this quest with his brilliant new book. It is a must-read for anyone who cares about the future of democratic capitalism.”
—Roger Martin, Institute Director, Martin Prosperity Institute, and former Dean, Rotman School of Management, University of Toronto

Navigating the Hazards of a New Economy