Press Release: The New Confessions of an Economic Hit man 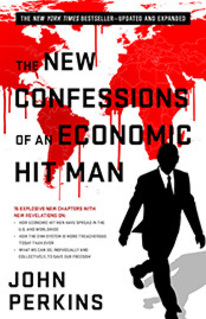 Who Are Today's Economic Hit Men? Their ranks have escalated since Perkins first exposed them twelve years ago.

Featuring 15 explosive new chapters, this new edition of a classic New York Times million-copy bestseller brings the story of economic hit men up-to-date and, chillingly, home to the U.S. And it gives us hope and the tools to fight back.

In this astonishing tell-all book, former economic hit man (EHM) John Perkins shares new details about the ways he and others cheated countries around the globe out of trillions of dollars. Then he reveals how the deadly EHM cancer he helped create has spread far more widely and deeply than ever in the U.S. and everywhere else — to become the dominant system of business, government, and society today. Finally, he gives an insider view of what each of us can do to change it.

John Perkins was the front man for a system that traded in fraud, rigged elections, payoffs, extortion, sex, and even murder. In The New Confessions of an Economic Hit Man — his extraordinary follow-up to Confessions of an Economic Hit Man, a book that spent 73 weeks on the New York Times bestseller list — Perkins continues to expose how government sanctioned EHMs create a system that has mired countries in Asia, Africa, Latin America, and the Middle East in fear and debt and held them in servitude to US interests with the all-too frequent backing of CIA jackal assassins and the military. Now this unholy alliance he calls the “corporatocracy” has spread its cancer into the heart of America.

EHMs in the form of bankers, lobbyists, corporate executives and others “con governments and the public into submitting to policies that make the rich richer and the poor poorer,” Perkins writes. The EHMs and jackals, who step in when EHMs fail, now attack the American economy and threaten the foundations of democracy as a tiny but powerful segment of the population attains unimaginable wealth while the middle class slides toward poverty.

But as dark as this true story gets in The New Confessions of an Economic Hit Man, the reformed EHM provides us with light to see our way through this living nightmare. He offers specific ideas and strategies for how each of us—students, entrepreneurs, middle-aged people, retirees, and corporate executives — can take actions to transform the failing Death Economy into a Life Economy that can regenerate devastated resources and provide abundance for future generations.

Perkins’s vast experience on both sides of the moral divide has taught him that together we have the ability to create a world where no group has the power to make other groups of people desperate and powerless.

He goes even further to say that it is within our power to clean up pollution; help starving people grow, store, and transport food more efficiently; develop new technologies for energy, transportation, communications, banking, and wholesale and retail trade; bring diverse communities together with the understanding that we all live on a “fragile space station that has no escape shuttles”; and live less materialistic and more spiritually fulfilling lives.

In this extraordinary new version of his massive bestseller — 40 percent of which is completely new material — Perkins adds a new introduction and fifteen new chapters to his eye-opening classic. Since its shocking release in 2004, the book has sold more than 1.25 million copies worldwide and been translated into 32 languages.

Perkins also includes documentation of EHM activity from 2004 to 2015. He complements his personal story by offering detailed information for readers who want further proof of the nefarious activities described in this book, or who want to pursue these subjects in more depth. Included are articles, reports, websites, Wikileaks and NSA documents, and more.
Publication date: February 2016

John Perkins was formerly Chief Economist at a major international consulting firm where he advised the World Bank, United Nations, the IMF, U.S. Treasury Department, Fortune 500 corporations, and governments in Africa, Asia, Latin America, and the Middle East. Since then, his books have sold more than 1 million copies. He has lectured at more than 50 universities around the world, and has been featured on ABC, NBC, CNN, CNBC, NPR, A&E, the History Channel, and in the pages of Time, The New York Times, The
Washington Post, Cosmopolitan, Elle, Der Spiegel, and many other publications.

Apart from his books on economics and politics, Mr. Perkins has also authored books on indigenous cultures and transformation, including Shapeshifting, The World Is As You Dream It, Psychonavigation, Spirit of the Shuar, and The Stress-Free Habit. In total he has authored 9 books which have appeared on the New York Times Bestseller List.

He is a founder and board member of Dream Change and The Pachamama Alliance, nonprofits devoted to establishing a world our children will want to inherit.

Praise for The New Confessions of an Economic Hit Man

“When I read Confessions of an Economic Hit Man I could not have known that, some years later, I would be on the receiving end of the type of “economic hit” that Perkins so vividly narrated. The New Confessions resonates with my experiences of the brutish methods and gross economic irrationality guiding powerful institutions in their bid to undermine democratic control over economic power. Perkins has, once again, made a substantial contribution to a world that needs whistle-blowers to open its eyes to the true sources of political, social and economic power.” —Yanis Varoufakis, former Minister of Finance of Greece

“The New Confessions offers deep insights into the nefarious ways economic hit men and jackals have expanded their powers. It shows how they came home to roost in the US – as well as the rest of the world. It is a brilliant and bold book that illuminates the crises we now face, and offers a roadmap to stop them.
—John Gray Ph.D., author of the New York Times bestseller Men Are From Mars, Women Are From Venus

“John Perkins probed the dark depths of global oligarchy and emerged into the light of hope. This true story that reads like a page-turning novel is great for all of us who want the better world that we know is possible for ourselves, future generations, and the planet.” —Marci Shimoff, New York Times bestselling author, Happy for No Reason and Chicken Soup for the Woman’s Soul

“Perkins provides a profound analysis of two forces vying to define the future. One is intent on preserving systems that serve the few at the expense of the many while the other promotes a new consciousness of what it means to be human on this beautiful, fragile planet. This powerful book inspires and empowers actions that manifest an awakening to our collective ecosystem and the rebirth of humanity—an EcoRenaissance.”
—Marci Zaroff, ECOlifestyle pioneer / serial entrepreneur, Founder of ECOfashion brands Under the Canopy & Metawear

“I loved Confessions of an Economic Hit Man. Ten years ago it exposed the real story. The New Confessions tells the rest of that story – the terrible things that have happened since, and what we all can do to turn a death economy into a life economy.” —Yoko Ono

“The New Confessions is an amazing guide to co-creating a human presence on our planet that honors all life as sacred. It exposes our past mistakes, offers a vision for a compassionate, sustainable future, and provides practical approaches for making the transition between the two. A must read for anyone who loves our beautiful home, Earth.”
—Barbara Marx Hubbard, bestselling author and President of Foundation for Conscious Evolution

“As one who has helped thousands of people grow their businesses, I’ve learned first-hand the importance of facing the crises old economic models created and acting positively to develop new approaches. Perkins’s experiences, his expose of the failures, his clear vision of what needs to be done, his call to action, and the sense of joy he feels for being part of this consciousness revolution are deeply inspiring.”
—Sage Lavine, women’s business mentor, CEO of Conscious Women Entrepreneurs, and founder of the Entrepreneurial Leadership Academy

The New Confessions of an Economic Hit Man By John Perkins