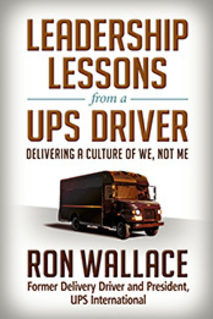 Ron Wallace was a UPS driver for six years before he rose through the ranks to become president of UPS International. In other companies that might be extraordinary, but for UPS it’s par for the course. UPS has a unique people culture. The company almost always promotes from within. Lifetime employment is common. Most employees own UPS stock. Wallace credits this spirit of “we, not me” with the company’s success—and his own. As he puts it, working at UPS gave him a PhD in teamwork. This is a must-read for anyone aspiring to become a great leader.

Instead of writing a typical business memoir that celebrates the leader as celebrity, Wallace shares vivid stories that focus on the people he worked with, the challenges they overcame, and the simple principles and practices that make up the UPS way. The leadership style described in this book is simple and direct—and it works. The straightforward and easy-to-understand lessons provide a blueprint for an individual or company to build on past successes and adapt to future challenges.

Ron Wallace is the former president of UPS International, where he was responsible for operations in more than 200 countries and territories, with more than 60,000 people under his direction. He also served on the corporate management committee that oversaw the day-to-day operations of UPS and its 400,000 employees.