David Marshall heads the editorial department, which is responsible for 40-50 new titles per year and 5-10 digital products or initiatives. 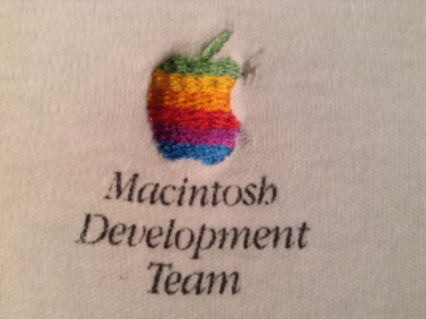 Everybody remembers that Steve Jobs unveiled the Macintosh in January 1984 and the infamous Superbowl commercial that featured the young woman running down the aisle of a dark theater and throwing her sledgehammer into the screen of Big Brother IBM clones, with the message that the world will never be the same–but few people remember that five months later in July, Steve took his Macintosh, in the form of a two-story Macintosh replica on the exhibit floor, to the National Computer Conference in Las Vegas, and showed off a host of business applications from independent software companies, to prove that his new Mac was no toy.

At the time, I worked for Peachtree Software in Atlanta as the brand manager in the marketing department for our flagship microcomputer accounting software. We had just published “Back to Basics,” the first accounting software for the Mac, and “Back to Basics” was my baby.  Apple invited us to debut it at the NCC show.  They made us feel like part of the Apple family.  They took us out to dinner before the show and gave us all “Macintosh Development Team” shirts with the Apple logo.

Proudly wearing my Apple shirt, I manned my Mac station on the upper floor of the giant two-story Macintosh replica in the exhibit hall.  All the demo pods surrounded a small glass conference room in the middle.  My accounting software demo was interrupted by Steve Jobs and Bill Gates spit shouting at each from purple faces just inches apart just ten feet from me.  This was a big deal for me because I was 28 years old and this was my first big rodeo, and I was a few feet away from two other 28-year olds who were already demi-gods in the microcomputer revolution.  I stopped what I was doing and tried to figure out what they were saying, but couldn’t hear.  I read later that Steve was livid that Bill Gates had stolen his graphic interface for Microsoft’s upcoming first generation of Windows, but that Bill retorted that if anybody had done any stealing, that Steve had stolen it from Xerox PARC, and that Microsoft was just re-purposing it. That was one of the most memorable moments of my high-tech career. It also impressed upon me how much of an evangelist Steve Jobs was for his product and company, and influenced me to only work for companies where I truly believed in the products and services.  I got off course a couple times, but mostly kept on the right path.

The postscript to this July 1984 close encounter was that when Steve Jobs announced the iPad in January 2010, I called up Apple and told them we wanted to sell our books on the iBookstore.  Berrett-Koehler was one of only seven book publishers that debuted their products on the iPad when it was releases in April of that year.  A year and a half later, when Steve Jobs died, I asked if I could do a tribute to Steve at our monthly staff meeting. The morning of the late October staff meeting, I dug out my Macintosh Development Team shirt and put it on.  After I did my tribute in front of about twenty staff members, Steve Piersanti, our president and founder said, “David, that was a impressive tribute, but the most impressive part is that you still fit into that shirt!

[email protected] – My Mini Life Map
I just turned sixty.  After reflecting on my last six decades and envisioning what my seventh decade might look like, I decided to create a mini life map* to tell the story with a few short words...
Read more...