Business and society: ceo’s like Doug McMillon fully embrace the multistakeholder view of the firm

David L. Cooperrider, Ph.D. is professor and chair of the Program on Business as an Agent of World Benefit at the Weatherhead School of Management at Case Western University. In 1987 Dr. Cooperrider and Dr. Suresh Srivastva published the original, foundation theory of AI in an article that has reverberated and changed the field of organizational development. 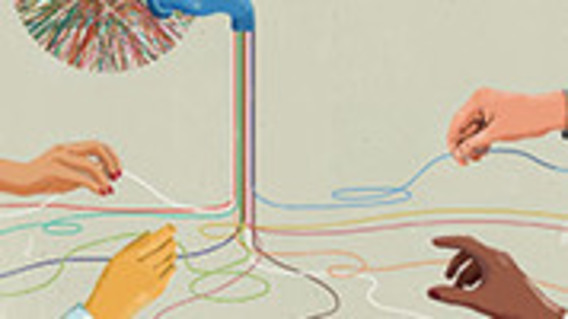 In the long term, corporate and societal interests converge. Walmart CEO Doug McMillon and SVP of sustainability Kathleen McLaughlin argue companies have an opportunity to use their scale and expertise to reshape global systems and mitigate complex problems.

When shift happens in the mainstream–companies such as Mckinsey and Walmart–it tells us something: a new normal, especially for a long-term thinking type of capitalism, is in the making. And even though one of the toughest things in a quarterly report world is to seriously think long-term, that’s what the top CEOs of some of the largest corporations in the world are doing. This article, by the CEO of Walmart, Doug McMillon and SVP Kathleen McLaughlin,  is instructive.

As the authors write:  "Between 2010 and the end of 2013, we reduced our energy consumed per square foot by 7 percent, and we now source 24 percent of our global electricity needs from renewable sources—progress toward our long-term goal of 100 percent. By the end of 2014, we were diverting more than 81 percent of our waste in the United States from landfills through recycling and reuse, on our way to our goal of generating zero waste.

Go beyond the core to change the system

While it is important to operate the core business in a way that delivers value for society and the business, a healthy, high-performing company can and must go further. The world faces social, environmental, and financial challenges of unprecedented magnitude and complexity. No one actor can resolve these issues single-handedly. Governments and civil society are increasingly calling business to the table.

Meanwhile, globalization and technology have heightened interdependence in our social, environmental, and financial systems. Even seemingly small actions can have serious consequences for others far away in space and time. Globalization and technology have also greatly increased transparency. Actions and their consequences, however far removed, are much more visible to all.

These forces have increased the opportunities—and the responsibilities—of business. If in the past 20 years the discussion has been about the need for business to serve stakeholders beyond just the customer and the shareholder, the next 20 years will be about the need for companies to improve the networks and systems they depend on. Leading businesses are actively using their scale and their particular assets to accelerate progress on tough social and environmental issues.

So, how can companies define their unique contribution to making society stronger? At Walmart, we use five screens.

1. Prioritize issues that are relevant to the company mission

Like most companies, we look for those issues that sit at the convergence of our business interests and the interests of society. For example, as the world’s largest grocer, we believe the sustainability of the world’s food supply is one of the areas in which we can make a significant contribution.

The United Nations projects that food production must increase by roughly 70 percent to feed the estimated nine billion people who will inhabit the planet by 2050. We will need to meet that challenge in a way that is sustainable for the environment and equitable for consumers and farmers (who make up two-thirds of the population in emerging markets). Our goal is to make the food system safer, more transparent, healthier, and more accessible—and to lower the “true cost” of food for the environment as well as customers and farmers.

2. Draw on the company’s particular capabilities

Even in purely philanthropic areas, companies can have greater impact by drawing on their unique business capabilities and applying those skills to complex societal problems. In our own efforts, we try to add value in ways that are different from—and ideally additive to—what others can do.

For example, to address hunger in the United States, we make use of our particular assets. Over the past several years, we have donated nearly 1.5 billion pounds of food to food banks across the United States, including an increasing amount of fresh food nearing the end of its shelf life. This improves nutrition among those most in need, while reducing the amount of food we send to landfills as waste. We also donated more than 180 trucks and refrigerated trucks, as well as time and expertise in logistics (since this is an area we understand well), to help strengthen the country’s charitable cold chain.

3. Aim for a triple bottom line

In tackling priority issues, we design our initiatives to promote benefits for society as well as business. We set ambitious targets, and we track progress rigorously.

In food sourcing, for example, we pursue initiatives that lower the environmental and financial cost of food production. One of these initiatives, agriculture optimization, aims to reduce greenhouse-gas emissions by eight million metric tons across ten million acres of row crops such as oats and rice by 2020. Similar initiatives in the food chain and our own operations have allowed us to reduce our greenhouse-gas emissions by approximately 18 million metric tons since 2010. To do so, we are working with the Environmental Defense Fund, as well as other large food companies, including Cargill and General Mills, to adjust the use of fertilizer and other inputs. We measure progress by tracking improvements in greenhouse-gas emissions, water, yields, and other critical factors per ton of food produced, by supplier and by category.

Such initiatives provide classic triple-bottom-line results. Besides the important reduction in greenhouse-gas emissions, they helped us to cut the price of fruits and vegetables in the United States by a total of $3.5 billion through 2012 and 2013, offering important benefits for our customers and improving the world’s food supply.

4. Reshape the system for lasting improvement

In the era of long-term capitalism, companies can and must go beyond the kinds of improvements described above. They can do this by harnessing their expertise and scale and by joining with other organizations to reshape global systems for lasting improvement.

The global food system is essential to our business. For it and for us to succeed, the system must evolve in a way that is sustainable for the environment and smallholder farmers around the world; the system also must be high-enough yielding to feed a growing world population. Walmart is working to enable that evolution. For more than a decade, we have been collaborating with the US Agency for International Development to improve the lives of smallholder farmers and women in the agriculture supply chain. Through our direct farm initiative in Central America, USAID and its implementing agencies have provided agricultural expertise, training, and capital for infrastructure to smallholder farmers, preparing them to sell into the organized retail sector. Walmart provides specifications based on consumer preferences, guidance on timing for different crops and varieties, and regular purchase orders for offtake of farm production. Smallholders gain a better price and more stable income, as well as the skills to improve yields and profitability. Local customers gain a wider variety of better-tasting fruits and vegetables at the time of year when they want to buy. The agriculture sector gains productivity and becomes more viable. In Argentina, for example, more than two-thirds of our fruit and vegetable supply now comes from such direct-farm programs. In our U.S. private-label supply chain alone, we depend upon roughly $4 billion per year in agricultural products from small and midsize farmers.

Now we are exploring opportunities to collaborate with others to strengthen transportation and processing infrastructure in emerging markets. This will help develop local economies, feed local populations, and support local farming families, all while providing a secure supply of high-quality food products for Walmart customers."

See on Scoop.it – Amazement and Achievement: Leading By Seeing What Works