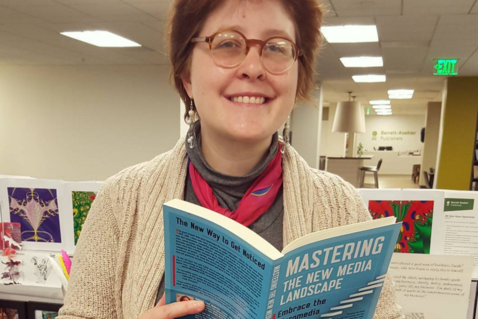 A book I edited on Mastering the New Media Landscape officially comes out today!!! The authors, Rusty Shelton and Barbara Cave Henricks, are book publicists who have an amazing talent for getting their authors on the news. Their book explains how you can grow and leverage your online presence to make headlines. Anyone can do it!  That's the magic of the new media landscape.

My question: is the new media landscape bringing us towards a world that is more socially just?

1) It lets diverse voices shine. It used to be that most media passed through the hands of powerful gatekeepers. The Internet has created more of a media meritocracy, where someone with a good idea can win out— regardless of whether powerful people approve of their race, gender, or controversial ideas. The #BlackLivesMatter hashtag was invented by black women; would their voices have had the same power in the old media landscape? I think not.

2) It allows people to tell stories which change their lives.   When a woman researching gender bias had her paper turned down from a journal because she had no male co-authors, she tweeted about it. The mass Internet outrage which followed, caused the journal to fire the sexist journal paper reviewer!  Another example: a friend of mine who self-publishes fantasy novels was in danger of having her house foreclosed on. She used her robust social media presence to tell her story and crowd-fund the money to save her house.

3)  It’s brought us an empowering transparency. The Internet has made karma an everyday reality; if someone bullies or insults another person, there’s no hiding it behind closed doors. The ill deed is sure to be revealed in the next viral tweet, YouTube video, or blog. The same with companies that have poor customer service or treat their employees poorly; their failures become known in a flash.

Risks of the new media landscape

1) The risk of not challenging our own viewpoints.  Some people think the Internet is behind the growing political division in this country. And I can see why; sometimes I will Google my own point of view and search for evidence, instead of Googling an honest question and open-mindedly searching for an answer. The best way to protect our minds and keep them open?  Make sure to follow news and updates from a wide variety of differently thinking people!  Don't just "like" people who are just like you.

2) The risk that others might misrepresent you online.   In an online world, making sure Google Search says nice things about you is crucial. The authors of Mastering the New Media Landscape recommend that everyone buy the url for their name. That way, when people search for your name, you’ll be able to show them your best side.  Rusty believes so much in the advice he’s giving, he even bought domain names for his newborn children! Of course, the social justice downside here, is that people without technical savvy and know-how will lose out. So it’s crucially important that people across America learn how to use technology.   That's why I donate and volunteer for the charity Black Girls Code.

3) The risk that big companies will find a way to control it all.  The news we see is now controlled by algorithms. Facebook has even conducted experiments on us, using their algorithm. Google’s algorithm is one of the most influential in the world, of course. Amazon’s algorithm has incredible influence on what books people read. Can Google, Facebook, and Amazon be trusted to keep our best interests at heart? This is why you should start building your audience today; in the future, you may have to pay the big companies a lot of money to reach your audience as easily as you reach them now.

What do you think about the risks and rewards of the new media landscape? Do you think the Internet has made the world a more socially just place?  What are the risks of this brave new world?  I can’t wait to hear your thoughts!