Why Leaders Should Celebrate Disobedience 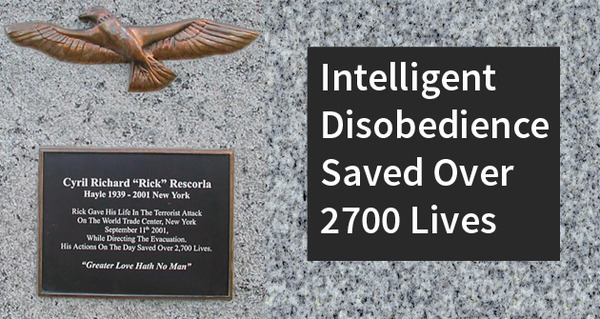 The darkest side of obedience

When Ira Chaleff came to present his book, Intelligent Disobedience, at the BK office, we realized it was more than a book to him: it was a lifelong mission. “You have to know something about my background,” Ira  began, looking around at all of us. “My maternal grandmother lost all her family to the Holocaust, except for  one niece.... As a little boy, I would see numbers tattooed on people’s arms and ask about them, and people  would say, ‘Shhh, we don’t talk about that.’”

Growing up in the shadow of the Holocaust, Ira became obsessed with the question, “How could people do that?”

“So in a sense, my research on Intelligent Disobedience, has been going on my whole life,” Ira explained. WHY do people obey orders they know are morally wrong? That is the question. Ira’s consulting practice  helps leaders and followers develop healthy habits around obedience. A follower should never displace their moral accountability onto a leader.

Why leaders should celebrate disobedience

Intelligent Disobedience is a book that will be of interest to corporate leaders. But what kind of CEO wants people talking back to him? A smart one! The truth is, sometimes the disobedient follower is the one who  saves the leader’s bacon. Ira told us about a nurse who was ordered by the doctor to give the patient the  wrong medication in their IV. When the nurse pointed out the mistake, the stressed-out doctor simply  barked, “Do as I say.”

So she prepared the IV and did everything but turn the valve. Then she called over the doctor, and told him, “If you want to do this, you have to be the one to turn the valve. I can’t do it.” This was enough to  make the doctor slow down and recognize his error. The disobedient nurse not only saved the patient, she  substantially helped her boss, freeing him from a likely burden of grief, remorse, and malpractice lawsuits.

Which kind of employee would you rather have? The one that follows you, even as you march straight towards an open pit? Or the one that helps you see the pitfalls ahead? This is an integral part of risk  management!

Sometimes disobedience can be downright heroic. Consider the story of the Rick Rescorla, working at the Twin Towers when the planes hit them on 9-11. An announcement came over the public address urging  people to stay at their desks... Rick refused to obey. Instead, he marshaled his employees to follow the  safety drill he’d designed. He was prepared, because he’d ignored the complaints of senior executives who  thought safety drills hurt productivity.

All but three of the company’s employees escaped with their lives, impressive given the scale of the disaster. One of the casualties was Rescorla himself, who lost his life when he went back to rescue  others. Even more than his physical courage, it was his intelligent disobedience that saved lives.

How can we get more intelligent disobedience?

“Historically, the greatest crimes against humanity are crimes of obedience. They are not crimes of disobedience,” Ira told us. So the task of encouraging appropriate disobedience is vital.

For his book, Ira Chaleff has studied the famous Stanley Milgram experiments in depth. (These are the experiments where subjects obediently administer what they believe are painful electric shocks to other  volunteers.) The experiments are frequently cited as evidence of the dark side of human nature.... but Ira believes the experiments also have important information about the conditions under which people DISOBEY. For instance, when one person insisted on disobeying, that often inspired others to follow his  example. Also, if the authorities running the experiment appeared to disagree, people were more likely to think for themselves.

But really, the task of nurturing intelligent disobedience begins with parents and schools. Too often parents and educators take the easy way out, teaching kids to shut up and snap to it, instead of teaching them to  think. Such decisions have serious consequences; for lives, for people, for organizations.

It begins with you

One of our editors, Neal Maillet, enthusiastically told Ira a story about being “so proud” of his children for disobeying. Neal’s kids heard someone calling for help from the bottom of a gulch while hiking. Neal didn’t  hear the cries for help, and thought his children might have imagined it, so he wanted to drop the issue. His children insisted that he pursue it, and an injured person was found at the bottom of the gulch!