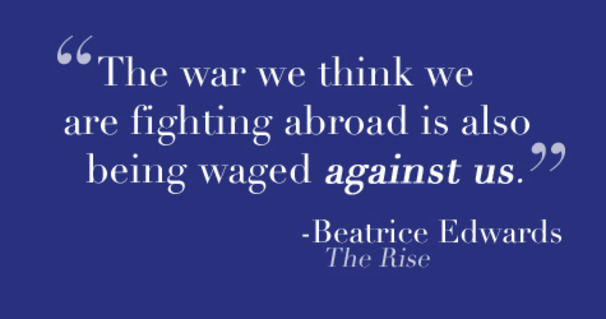 What the Government Hasn't Told You

Since June 2013, when Edward Snowden first leaked NSA secrets to the press, there has been a flurry of concern among American citizens about the extent of the U.S. government in private affairs. On April 14th 2014, Berrett-Koehler will release The Rise of the American Corporate Security State: Six Reasons to Be Afraid by Beatrice Edwards, which unpacks the danger of the government-corporate complex that spies on American citizens. This moment in history is reminiscent of nearly a decade ago, when Berrett-Koehler published John Perkins’s Confessions of an Economic Hit Man , revealing troublesome U.S. involvement in the affairs of foreign nations.

Though these books cover a thirty-year range of government dealings, they have much more in common that initially meets the eye. Confessions is a memoir of John Perkins’s years as an Economic Hit Man, a “highly paid professional who cheats countries around the globe out of trillions of dollars.” He writes of his participation in the “corporatocracy,” that dangles infrastructure loans in front of the leaders of developing countries, then persuades them to spend the loans by contracting American corporations. Overwhelmed with debt, these nations and their leaders are essentially under the control of the United States, who can then manipulate their involvement in world politics and the global economy. Granted, Perkins reflects on events from 1971-1981, an era that seems distant to the current lens.

This is where The Rise comes in. Beatrice Edwards is the Executive Director of the Government Accountability Project (GAP), a non-profit law firm that protects whistleblowers in the workplace, whistleblowers like Edward Snowden. The Rise explains the NSA’s tracking of the lives of private citizens, and how this act is becoming increasingly problematic to American society. The book also discusses how corporations are able to take advantage of the information the NSA has uncovered, which creates a political-economic entity that Edwards refers to as the Corporate Security State, but seems synonymous to Perkins’s “corporatocracy.” What these authors are revealing is essentially two parallel problems in the American government.

Perkins is pointing to the shady actions of the U.S. corporatocracy to take advantage of developing nations and benefit the American economy and position in global politics. What Edwards describes is a recent turn toward the internal affairs of the U.S.: the imperialism over American citizens themselves in order to benefit corporate leaders. Though the tactics have changed significantly over the decades, the idea is essentially the same: to give those in control more power.

Confessions and The Rise each share intriguing true events about the inner workings of a government that is not as transparent as one would hope. Edwards, for one, suggests several courses of action for American citizens to take in response to this new knowledge. For example, GAP’s Action Center needs your help in pursuing a more democratic government, so click here to get involved with their campaign to protect whistleblowers everywhere. I hope that you would also take the time to simply stay up-to-date on the actions of the United States and affairs around the world. I highly encourage you to read Confessions of an Economic Hit Man and The Rise of the American Corporate Security State for yourself in your search to be an informed citizen.

Below is an animated interview with John Perkins, describing Confessions