The Hunger for Powerlessness 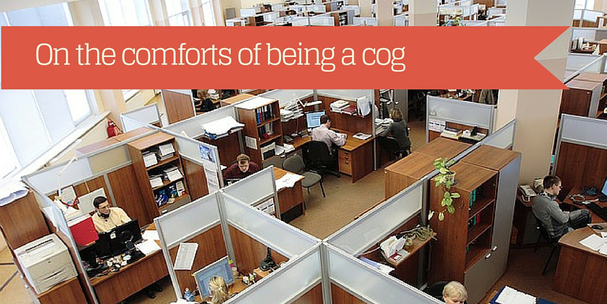 Is it true that humans are power-hungry?

There may be a few people in this world who are hungry for power, and will do anything to get it. But most people I’ve met are just the opposite. They angle and maneuver to get LESS power. They say, “It’s not my decision; it’s up to my boss.” They say, “I don’t really get to decide that; it’s all decided according to the rules and the regulations.” People will go to incredible lengths to hand over their power to others, or deny their own power.

Like most social animals, we crave status, but we also crave safety and belonging. Reaching for power can increase your status, but it can also jeopardize your safety or your belonging, by getting you in trouble. When people give up their power, they are usually doing it to stay out of trouble. If something goes wrong, they don’t want to be blamed for it. Saying, “I was just following orders,” or “I was just following the rules,” is an impeccable defense in our culture.

What if the real temptation is to give up your power?

Sometimes, people who don’t follow rules can be heroes. I learned about one such hero, when my brother tattooed some Japanese writing on his forearm. The tattoo was the signature of Chiune Sugihara, who signed thousands of Jewish passports to save Jews from being killed in the Holocaust— without permission from Japanese leaders! Instead of letting his bosses make the decision for him, Sugihara used the power he had to save lives.

If you are in the habit of giving up power to keep yourself safe, you may forget that you ever had the power in the first place. If I had been in Chiune Sugihara’s place, I’m not sure I would have realized I could just sign passports without getting permission from Tokyo. It genuinely wouldn’t have occurred to me I had the power to put that pen on that paper.

Why do people give up their power, and how can we make them stop?

When we design organizations and governments, we often focus on the question of how to limit the abuse of power. The question of how to keep the people from giving up their power, gets less attention. In fact, we are taught from the youngest ages that our role is to obey our teachers, our parents, and the rules. By the time we get our high school diploma, it’s a reflex for many of us.

Any leader who wants his employees to behave with independence and initiative, has two battles to fight. First, they need to let go of their own need to control and micromanage. Secondly, they need to create a safe space for employees to take risks and make decisions; let their employees know they won’t be punished for coloring outside the lines. The second battle is way harder to fight. Even if you want to take off your crown, there will always be someone who wants to place it back on your head.

How can you remind yourself that you have power?

Interns in particular, can be very nervous about doing things wrong. They are fresh from school, where it is all about getting things right. It took me years to stop worshipping the golden calf of “the Right Answer.” In most real-life situations, there is no right or wrong answer. So when I find myself facing a tough decision, I try to stifle my impulse to look up a rule or pass the buck.

I think you have a nice, compact equivalence here:

Trying to give up power is a type of failing to accept responsibility.

So one form of the question you're asking is "how do you get people to do their job?" at least when that job includes some authority.

Yes, these are profound concepts, well expressed.  Thank you for articulating them.

Unleash the Power of Vision in Your Work and Your Life