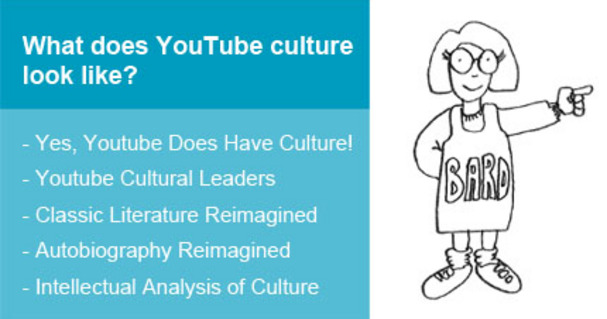 If you snorted at the very idea of YouTube having “culture” think again. This is one of the most exciting frontiers for cultural development in the digital age. Unlike traditional media, it is open to all with creativity, a camera, and a drive to connect. This means that success is driven more by quality and popular appeal, and less by luck and privilege. Space is opening up for voices there never was room for before.

Siblings John Green and Hank Green, (known as "The Vlogbrothers") are thought leaders in a positive, community-oriented YouTube movement. They started out simply as two brothers who stayed in touch via YouTube videos they made for each other. These weekly "video letters" to each other were so entertaining that hundreds, then thousands, of viewers began to participate in their sibling relationship. At the date of this writing, their channel (called “The Vlogbrothers”) has over 1.3 million subscribers. I consider them to be Internet marketing geniuses.

John Green is the author of NYT best-selling young adult novels. His success stems not only from his writing talent, but from his Internet fame. In this video, he talks about the success of his latest novel, then shares some of his hilariously bad childhood writing with his fans. I like the lesson that everyone has to start somewhere.

Hank Green is equally successful, but in a different way. His Twitter bio reads “Internetainerpreneur,” a portmanteau of the the words internet, entertainment, and entrepreneur. He produces online video that educates about science, literature, etc. He is also the organizer of VidCon. The depth of love held for him by the Internet community is best expressed by this VidCon tweet:

Perhaps this video will help you understand why Hank’s fans feel so strongly about him.

The fans of Hank and John are referred to as “Nerdfighters” or collectively as “Nerdfighteria.” This is because they are nerds who fight for there to be more goodness in the world. Their formally stated mission is to “decrease world suck.” I am an enthusiastic Nerdfighter.

Lessons to be learned from the Vlogbrothers. Don’t make your videos for an anonymous horde of Internet denizens. Make your videos for someone you love & care about, someone whose opinion you value. This could be a family member who lives far away, a best friend, someone you admire, etc. Ironically the videos which do the best job marketing, are labors of love, not calculated marketing ploys.

Also, it takes a long time to become Internet famous. Knowing that at least one person is anxiously waiting for (and enjoying!) your work will keep you motivated.

The Lizzie Bennet Diaries is Jane Austen’s novel Pride and Prejudice retold over the course of 100 short online videos. It’s a brilliant adaptation that’s received a lot of positive press, and seems to have more appeal for all ages than other YouTube creations. My mom (who usually avoids social media like the plague) was such a fan of the Lizzie Bennet Diaries she would call me up and hound me to watch the latest episode. The show has over 200,000 subscribers, some of them pre-existing Jane Austen fans and some of them converts.

The idea is that Elizabeth Bennet, the main character of Pride and Prejudice, is telling about her experiences in a vlog. Here’s the first episode:

Jane Eyre has also been retold in vlog form. The creators of Lizzie Bennett diaries will soon be producing Jane Austen’s novel Emma.

When one vlogger does something which catches on, the other vloggers tend to join in (thus building up the “community” aspect of YouTube).   I’m not sure where it started, but at one point all the vloggers were doing “Draw My Life” videos where they doodled their autobiographies in amusing or touching ways. Here’s a Draw My Life video from YouTube Star Hannah Hart, the host of “My Drunk Kitchen,” a channel where she amuses people by cooking badly while drunk.

The premise of Hannah’s channel may seem silly, but Hannah Hart leverages her fandom (over 700,000 subscribers) to accomplish important activist goals. For example, she went on a tour of the USA where she organized her fans to volunteer in food pantries in 50 major American cities. As well as working on hunger issues, Hannah Hart is also very important to the LGTBQ community, and has helped a lot of gay teens feel better about who they are. Her Draw My Life story is among one of the more touching ones I’ve seen:

PBS Idea Channel takes concepts in popular culture and does insightful, humorous, analysis and unpacking of them. He uses words and concepts you’d expect to find in someone’s graduate thesis, but he keeps it all extremely entertaining. It's pretentious, but in a self-mocking way that makes it all very palatable.

In the video below, the host of PBS idea channel analyzes how Jurassic Park might actually be a critique of the moral dangers of capitalism.

Watch This Video on the PBS Idea Channel

6. Make sure you keep on exploring!

This is just a quick tour of a few cultural landmarks most YouTubers would recognize. YouTube is full of many other exciting cultural movements as well. I invite you to explore at your own leisure and get inspiration for your own creative vlogs and video! To read more about becoming an online video artist, check out the page top index.

Empowerment Takes More Than a Minute