Most People I Know Are Afraid of Innocent Teenagers 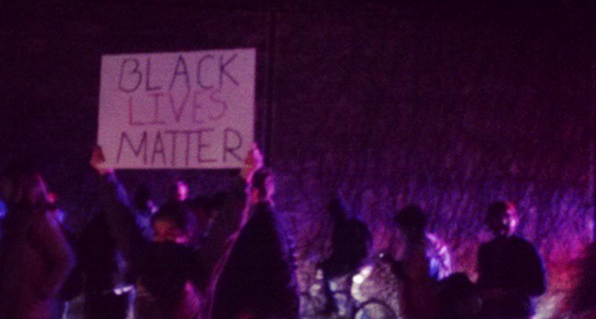 When the Black Lives Matter protests happened outside my Oakland office, many of my white friends were annoyed, worried about their commute and their safety. When I said, “We shouldn’t be avoiding the protests. We should be joining them,” my words fell into a little nervous silence.

When I blogged about joining the protests, some folks back home criticized me for putting myself “at risk.” One guy even told me, “They don’t want white people marching in their protests. When you show up, they probably wonder, ‘Why is she even here?’” This just wasn’t true. The black women leading the chants had greeted me with a huge smile when I arrived. I felt warm and welcomed in the heart of the protests.

Although their ignorance frustrated me, I understood how my fellow white people felt. Five years ago, I wasn’t much different from them. I knew that racism was a documented fact (how could you not?) but I hoped that stories I heard from individuals were exaggerated. I just didn’t want to believe such unfairness and sadness could be real. Protected by my own place in society, it was possible for me to shut my eyes to much of the ugliness in the world, and so I did.

I remember the day I started to change. I had just began working as a Youth Services Assistant for a library in a low-income neighborhood where people of color were in the majority. I was a teen mentor and designed after-school activities. That day, a vivacious and popular high school girl, (we’ll call her B) burst into the library, clearly upset, wearing a decorated cardboard sign around her neck. In the center of the sign, was a black-and-white picture of a slightly older boy with dreads.

I had no idea at all what was going on. My coworker, Ms. Vee asked laconically, “That your cousin?” B snapped, “Yeah,” and shuffled into her usual seat to check Facebook on the library computer. Born and raised in the neighborhood, Ms. Vee already knew what had happened. I didn’t find out until later that day, when my boss, Mr. Coley, came to talk to me. His coffee-colored face was always wrinkled with kind worry — and today the frown lines were deeper than usual.

Mr. Coley made sure to speak loud enough for the nervous kids who filled our Teen Center to overhear. “It’s a real tragedy about that kid,” he told me, “A real shame. A new police officer, brand new to the force, sirens and everything, responding to a domestic violence call — well, he was driving in a hurry. And this kid was riding his bike in the no-ride zone at the edge of the road. I wish kids wouldn’t do that! But he’d just purchased a birthday card to give to his mother; and he was so excited to go and give her the card, he was biking along without paying any attention. The police officer must feel TERRIBLE right now. His first day on the job, and a kid accidentally gets run over and killed.”

The pieces slowly clicked into place for me. The boy who had been run over by a police officer was B’s cousin. She was wearing a picture of him around her neck to honor his memory, honor his death. And… all the kids were perhaps considering the fact that the police officer might have run him over on purpose. Mr. Coley had most likely come to the library, hoping to reassure the kids it was an accident. To keep tensions between the police and the youth from being inflamed further. To use his position as a trusted leader to infuse a measure of peace, and perhaps too a small warning — don’t bike in the no-bike zone. Reminding B that the police officer who ran over her cousin was human too.

The cycle of mistrust between the teenagers of color and the authority figures who bossed them around was hard to stop. And in my opinion, it wasn’t the kids who were to blame. Mr. Coley and Ms. Vee were wonderful, but I was amazed by the number of educators who took the attitude of jailkeepers trying to curb and subdue a hostile populace. Certain librarians behind their checkout desk fortresses, seemed to view the kids as the barbarians at the gates.

I couldn’t view the kids that way, not after playing endless games of Uno with them, and introducing them to the board game Settlers of Catan. Sometimes they told us stories about their conflicts with their school teachers. I barely recognized them in those stories. One of the nicest and smartest kids at the library, (let’s call her BJ) told me about how she got really angry one time and threw a chair at her teacher. I couldn’t imagine it.

A retired Kodak executive had donated cameras to the library for kids to use in photography projects, and BJ was very excited to take pictures. I remember one in particular, a picture of a middle-aged woman hunched in an office chair with her back turned. Every line in her slumping form expressed misery. BJ said in tones of dry irony, “That’s the teacher that I told you about. The one I threw the chair at. She don’t like me too much.” In its own way, it was a beautiful portrait, one that expressed emotion: the teacher’s hostility and fear, the turned back. I saw it as BJ trying to understand her teacher through the lens of her camera.

One of the kids, J, I spent a lot of time with, because he had been kicked out of school for causing his teachers too much trouble. We hung out in the mornings at the library and played chess (after I finished teaching him how, he beat me every time. He was very good at it.) He studied independently with a tutor because the school district was legally obligated to provide him with an education, but didn’t want him in the classroom.

I asked him what he had done to get kicked out, and he said he had set up a bucket of water to fall on a teacher’s head. J was a fun-loving person who used practical joking to show off for the other kids. If he had gone to my high school, he would have been at most suspended for a day for that prank. Kicking him out for a year was reflective of the us vs. them mentality between the students and the educators.

On my last day on the job, J, who was reasonably fond of me, said with his familiar world-weary cynicism, “See you never!” and biked off. It was harsh, but it was fair. I haven’t seen him again; my career took me across the country.

Sometimes I write to Ms. Vee to find out how he is doing. She’s worried about him. She knows how the school-to-prison pipeline works. It’s been five years, and the bigger he gets, the more danger he is in. I thought about writing him a letter. But what could I say? I see him as a talented, intelligent, funny, wonderful person. But I can’t change his world. I can’t make other people see him that way.

So when the Black Lives Matter protests came to my neighborhood in Oakland, they gave me hope. I thought, maybe we can really change the world. Maybe someday people like J will be seen for who they truly are.

Next time you see a group of teens of color laughing and joking on the street with one another, please don’t be afraid. Your fear puts them in more danger than you can ever know.

The End of Diversity As We Know It

Why Diversity Efforts Fail and How Leveraging Difference Can Succeed