Making A Difference, One Person At A Time

BJ Gallagher is a workshop leader, keynote speaker, and author. Her topics include: leadership skills for women, male/female communication styles, how to manage your boss, thriving on change, and tapping into the creativity of diversity. 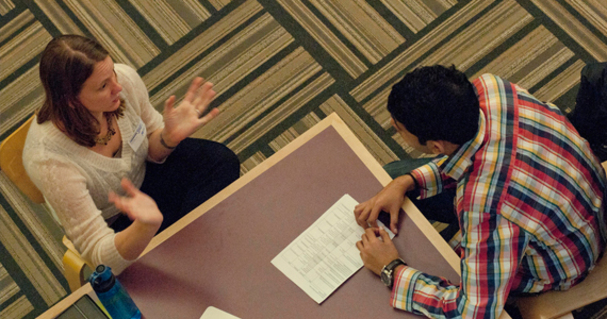 While some people make a difference by transforming whole organizations, others do it in a quieter way. They reach out to help others, one person at a time. Jim Shaffer is one of those people. He was the chief financial officer at the Los Angeles Times where I worked in the late 1980s.

My first two weeks with the company were spent in orientation, beginning with individual meetings with all the senior executives. I was a few days into this orientation when I met Jim in his office. He was warm and friendly, handsome and outgoing, his boyish good looks giving him the appearance of a twenty-something junior executive, rather than a forty-something CFO.

He asked me how I liked my job so far, and I responded enthusiastically. “What’s not to like? Smart people, interesting work, great pay, and a high status organization-what more could a girl want?”

He smiled knowingly and reached for a piece of paper. On it he drew something like a diminishing cosine curve: morale on the vertical axis and time on the horizontal; morale starting very positive, then declining to negative before recovering to a lower positive.

“Let me give you a little heads up,” he said. “When you come here, you’re excited, optimistic, full of energy.” He pointed to the top of the cosine curve. “Then, when you’ve been here a while, you start running into obstacles. It isn’t quite as wonderful as you thought.” He points to the curve heading downward. “It keeps getting worse, as you encounter bureaucracy and get frustrated. Finally, you hit bottom.” He pointed to the bottom of the curve-then he circled it. “When you get there, call me. We’ll have lunch.”

Several months went by, and sure enough, Jim was right. My experience was exactly the way he had predicted. Finally, I picked up the phone and told him: “I’m ready for that lunch.”

“I wasn’t expecting your call so soon,” he said over lunch. “I thought I’d hear from you in a year or so… but three months?”

“I’m a quick study,” I replied unhappily. I poured out my tale of woe, alternating between tears and anger. He listened; he nodded; he shook his head sadly. He was able to empathize and tell me I wasn’t crazy. He was also able to help me see options and choices-I didn’t have to be a victim of the bureaucracy.

What I learned later was that I was not the only young manager whom Jim had coached through difficult times. He had a whole cadre that he watched out for and helped develop. He loved to spot bright, young, talented newcomers and work with them one-on-one. He understood how important individual attention is in a huge organization. He made a difference in the lives of each and every one of us.

The biggest difference Jim made was simply by taking an interest. It made us feel valuable to have a senior executive take the time to encourage us. I’ll always be grateful for the difference Jim made in my life, and I know that many others feel the same.

Ask yourself these important questions…

BJ Gallagher is a consultant, speaker, and author, specializing in diversity, personal accountability, values and ethics, and gender issues in the workplace. Her clients include the American Press Institute, the Arizona Republic, the Atlanta Journal Constitution, and Gannett newspapers, among others. She has co-authored three Berrett-Koehler books: A Peacock in the Land of Penguins (2001),What Would Buddha Do at Work? (2001), and Customer at the Crossroads (2000). To learn more, go to www.peacockproductions.com.