Tips on How to Say No | Laura Stack 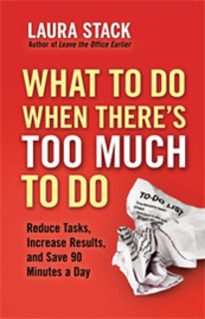 Tips on How to Say No

Adapted from What to Do When There's Too Much to Do (Berrett-Koehler, 2012) by Laura Stack

Your feelings matter. If you want to say no, there’s a reason behind it. Sometimes, you simply have to listen to your own gut. With that in mind, here are some additional tips for saying no.

All you need is love. Do your best to say no in an upbeat way. This sounds like a contradiction in terms, but there’s a big difference between saying “Not just no, but hell no‚” and “I’d love to but just can’t take that on right now!” A positive rejection can ensure no one gets hurt feelings, especially if you follow up with, “But please keep me in mind for any further projects!”

Don’t make empty promises. If you can’t do something (or just don’t want to), come right out and say it. Don’t make an empty promise and then let it come crashing down around you, leaving your requester in the lurch. If you turn them down flat, they have the opportunity to find someone else. If you find it uncomfortable to say no immediately, ask for a little time to think it over. This will put the person on notice you might very well refuse them. Then return with your answer promptly and politely.

Don’t apologize for or explain yourself. If you can’t take on a new task, decline without making an issue out of it and offering a ton of explanations. A simple, “Sorry - I’d love to help out, but I don’t have the bandwidth right now,” is sufficient. They don’t need to know more; in any case, you're not obliged to justify yourself, no matter how much you might disappoint the other party. Be polite but assertive. This, of course, applies to fellow coworkers. For the boss, you’ll need to try negotiation.

Negotiate. If your boss presents you with a task you can’t outright refuse, but your plate is undeniably full, don’t hesitate to point this out. Openly discuss your current deadlines and workload, and communicate both honestly and clearly. For example, you might say, “I'm currently working on X, Y, and Z projects. As things stand, I believe this additional project is beyond my capacity at the moment, and I want to return quality work in a timely way. Would you like me to hand it off to someone else, hire a contractor, or would you prefer to reprioritize my existing project load for me?”

Meet someone halfway. Sometimes it’s hard to say no to a request, especially when it’s clear someone thinks enough of you to try to tap your expertise. You can arrange to meet people halfway. For example, you might admit you’re already booked up, but make it clear you’ll do all you can to help. Or, rather than being a committee member, you’ll act in an advisory capacity. Inform the requester you can do the task then, and not now. This solution may satisfy you both if the task isn’t time-critical.

Be persistent and consistent. Some people just won’t take no for an answer and will keep bugging you to take on a task, no matter how many times you refuse them. In a case like this one, you’ll have to respond to their persistence with persistence of your own. Some people will feel obliged to ask a second time later on; again, this is no big deal if you just say no again. Use this technique with the dysfunctional ones who demand to know why not (see the first tip) or ask over and over, as if they can’t believe you refused them. Don’t let them wear you down.

Be crystal clear. Be straightforward when turning someone down; say no when you mean no. Don’t couch your rejection in obscure terms or beat around the bush; just say no in a direct way, so you don’t have to repeat yourself because you confused someone.

Don’t worry too much about their feelings. Some people take a turndown as a blow to their self-esteem. This is not your problem. Your goal is to reduce your commitment level, not to help others reduce theirs - and that’s exactly what they're attempting when they ask you to take on their tasks.

What to Do When There’s Too Much To Do

Reduce Tasks, Increase Results, and Save 90 Minutes a Day

How the Effective Executive Spends Time

What To Do When There's Too Much To Do

Reduce Tasks, Increase Results, and Save 90 Minutes a Day