The Realms of the Multiverse | Joe Pine 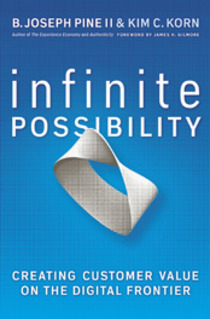 Concrete Examples to Describe the Realms of the Multiverse

A sample of the ideas discussed in Infinite Possibility (Berrett-Koehler, 2011)

Reality (Time, Space, Matter): A walk in the woods, a dinner out, a visit to the beach. (Do not interpret Infinite Possibility as a plea to abandon such wonderfully sensory experiences!)

Augmented Reality (Time, Space, No-Matter): Using the camera in your iPhone to explore the world in front of you, such as to find the nearest restaurant that appeals to you.

Warped Reality (No-Time, Space, Matter) : Visiting a living history museum, such as Plimoth Plantation or Colonial Williamsburg, or any other way you play with time.

Virtuality (No-Time, No-Space, No-Matter): PlayStation games, social media, virtual worlds, or any such experience you have on a screen.

Augmented Virtuality (No-Time, No-Space, Matter):Enhancing your Virtuality experience with a Wii or with a Kinect, where the body itself is the material substance augmenting the screen-based experience.

Physical Virtuality (Time, No-Space, Matter): Designing some physical object virtually, and then using a 3D printer to make it real, such as enabled by Netherlands-based Shapeways.

The Gift of Anger

Use Passion to Build Not Destroy