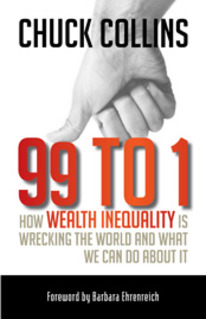 Seven Key Take-Aways from 99 to 1 by Chuck Collins

Inequality Matters to You. Think about what you care deeply about. Kids, health, education, the environment, entertainment, housing, and the amount of free time you have. In every area that you care about, the extreme wealth inequalities of the last several decades have damaged and undermined these conditions.

We Are Living In An Inequality Death Spiral. These growing inequalities of wealth, power and opportunity interact in a frighteningly dynamic way to contribute to a downward spiral of worsening social, ecological and economic conditions.

99 to 1 Is a Powerful Lens For Understanding This Historical Moment. The 99 to 1 framework is a powerful way to understand what is happening in our society and economy. It is a way for people to situate their experience and recognize the dramatic shifts that have occurred in our lifetimes. It also has significant political implications for political elections. Some candidates will run as “advocates for the 99 percent” and challenge their opponents as “serving only the 1 percent.” We should embrace the 99 to 1 framework and work with it.

Some People Are Responsible for Excessive Inequality. A simple explanation of how inequality has grown is that a small segment of the top 1 percent - with an organized base in Wall Street-based financial institutions - have worked over many decades to rig the rules of the economy to favor the 1 percent at the expense of the 99 percent. The rules have been tilted in favor of large asset owners at the expense of wage earners. These rules include government actions and policies related to taxation, global trade, regulation, and public spending.

The 1 Percent is Not Monolithic. Not everyone in the top 1 percent is to blame for rigging the rules. Nor is everyone in the bottom 99 percent without responsibility for the growth of inequality. Within the 1 percent are people who have devoted their lives to building an healthy economy that works for everyone. The focus of our concern and organizing should be the “rule riggers” within the 1 percent - those who use their power and wealth to influence the game so they and their corporations get more power and wealth. This is good news, because the “rule riggers,” though powerful, don’t hold all the cards.

Corporations and Business Are Not Monolithic. Just as individuals in the 1 percent are diverse actors, the 1 percent of corporations are also not unified. There are several thousand multinational corporations - the “Wall Street Inequality Machine”-- that are the drivers of rule changes. But they are the minority.

These Inequalities are Reversible. Here’s the good news: We can reverse the inequality death spiral. We can change the conditions that are worsening inequality. Indeed, we did this once before in the last century after the first Gilded Age. The seeds of a new social movement to reverse these wealth inequalities are sprouting across the planet.

99 to 1: How Wealth Inequality Is Wrecking the World and What We Can Do about It