Press Release | What the US Can Learn from China 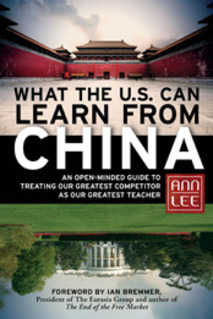 Lessons from the Dragon: What the U.S. Can Do to Remain a Superpower

New Book by NYU Professor Challenges Americans to Be Open-Minded

San Francisco, CA - America is on the brink of losing its superpower status unless it makes radical shifts in policy. In WHAT THE U.S. CAN LEARN FROM CHINA (Berrett-Koehler, $27.95; January 2012), NYU professor of economics and Demos senior fellow Ann Lee suggests taking a look at America’s greatest competitor for answers on how America can stay competitive well into the next century.

Lee outlines the best practices and strategies that have worked for China that may be incorporated into the U.S. capitalist political system to ensure that it keeps pace. Otherwise, she warns, the country is bound to face the same fate of so many great empires before it.

The Wisdom in Learning from the Competition

The author's exceptional track record as a successful Wall Street banker, hedge fund manager, media commentator and graduate studies professor in both the U.S. and China uniquely situates her to help Americans understand how China sees its own society and to dispel common misperceptions.

For example, many people in the West have been led to believe that China is a lock-step, top-down dictatorship, with a passive public forced to simply accept whatever leaders they're given. But China has political ‚“quality control ‚” that other countries can only envy. Aspiring politicians in China are required to take a competency exam before entering into public office. They must prove their ability to lead by providing a long track record of their service to the community and their ability to run and improve a business.

A Counterintuitive Approach: Seeing Opportunities Where Others See Threats

Barack Obama, in his annual State of the Union address in January 2011, warned that the country is facing a new ‚“Sputnik Moment. ‚” China appears to be on the same trajectory as the U.S, with exponential improvements in wages, working conditions, and global influence. Instead of resting on their laurels, Americans need to realize that this is a far more competitive world from when the U.S. emerged from World War II as the sole superpower. With her book, Lee challenges Americans to set aside their fears of China - complaining and demonizing China does not serve anyone's interest - and take a look at what might work.

For example, the Chinese government lays out 5-year plans that are made public and used as benchmarks to track progress. They develop Special Economic Zones (SEZ) to test drive new policies before implementing them in the entire country. The Chinese invest heavily in their education system and hold their teachers in high esteem.

Lee makes it clear that she is not blind to China's shortcomings -including problems with corruption -and she does not advocate the implementation of all things China does. Lee lays out clear and persuasive arguments for adapting the current education, political, and economic systems in the U.S. with strategies that have worked well for China, just as China and other countries have learned fromthe United States. These arguments are ones that open-minded politicians, concerned citizens, and savvy economists - people who recognize that learning is a two-way street - may want to take note of in order to ensure that America remains strong in the coming century.

Ann Lee is currently an adjunct professor of finance and economics at New York University and a senior fellow with Demos. She was also a visiting graduate economics professor at Beijing University in 2008 and an adjunct finance professor at the Lubin School of Business at Pace University from 2006-2007. Before that, she was an investment banker at Bankers Trust and Alex Brown & Sons and a partner at two multi-billion dollar hedge fund firms specializing in credit arbitrage, credit derivatives, and foreign exchange.

Ms. Lee graduated with honors from University of California, Berkeley, won a fellowship to Princeton's Woodrow Wilson School, and received an MBA from Harvard Business School. She has been widely published in the media including The Financial Times, The Wall Street Journal, Newsweek, Forbes, and Bloomberg BusinessWeek, and regularly appears on CNBC, Fox Business, Bloomberg, CNN, NPR, and many other television and radio stations around the world. Her expert insight has been quoted in multiple publications, and she has been featured as a keynote speaker in numerous academic and professional conferences, including those hosted by Columbia University, Fordham University, Fidelity, and the China Economic Review.

Born in China and raised in the United States, Ann speaks English, Mandarin and Cantonese. She has provided consultation to influential policy officials in both countries, including current and former members of the White House, the U.S. Treasury, the SEC, the New York Federal Reserve, China's Ministry of Finance, and China Investment Corporation.

What The U.S. Can Learn From China

Decoding the Notebooks of a Genius