Press Release: The Empress Has No Clothes by Joyce Roche & Alexander Kopelman 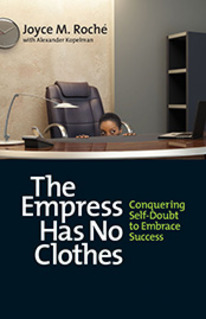 The Empress Has No Clothes:
Conquering Self-Doubt to Embrace Success

By Joyce Roch © and Alexander Kopelman

“…valuable on both personal and professional fronts.” -- Publishers Weekly

San Francisco, CA - Joyce Roch © rose from humble circumstances to earn an Ivy League MBA and serve as CEO of Girls Inc. and COO and President of Carson Products Company, now part of L'Oreal. She was the first female African-American Vice President of Avon Products, where she led global marketing. She received the "Legacy Award" at the 2006 "Women of Power" Summit of Black Enterprise Magazine.

Yet despite this success, Roch © couldn't help feeling like a fraud. "I was filled with self-doubt, which sometimes verged on panic, because with every new step up came the familiar fear that this time I would finally be discovered for the impostor I felt myself to be," she writes. The phrase “the empress has no clothes” kept running through her head. She was nothing like the emperor in the Hans Christian Andersen story-she was certainly not a fraud. And yet that’s how she’d always felt.

Roch © discovered there was a name for this feeling: the impostor syndrome. In this deeply personal memoir she shares her lifelong struggle with the imposter syndrome and offers advice and coping strategies based on her own experiences and those of other high-achieving leaders who have suffered from it.

Roch © isn't alone with this feeling, as she discovered while researching her book. Debra Lee, Chairman of BET Networks and Ed Whitacre, former chairman and CEO of General Motors, are among the top executives who divulge their similar experiences of impostor syndrome and how they overcame it in this book. This book is especially timely today as our nation's most diverse Congress in history was sworn in earlier this year - 101 women and 86 people of color.

As she tells her story, Roch ©, as well as her friends, identifies the situations and circumstances that can trigger these irrational feelings of inadequacy. For her, being from a working-class background, being black, being a woman, and often being younger than her professional peers made her feel she had to try that much harder to prove herself. But insidiously, the more she achieved, the more inadequate she felt. She was never able to enjoy her success; she just fell into a vicious cycle of ever-increasing work hours and an ever-decreasing personal life.

The imposter syndrome constricts people’s lives, makes them waste time and emotional energy, and can even damage their health. The hard-won advice this book offers may never entirely silence the voice of doubt, but it can quiet it enough so that, like Joyce Roch ©, you can finally live a life of joy, zest, and true fulfillment.

Joyce Roch © has served as CEO of Girls Inc. and COO and President of Carson Products Company, now part of L'Oreal. She was the first African-American Vice President of Avon Products, where she led global marketing. She received the "Legacy Award" at the 2006 "Women of Power" Summit of Black Enterprise Magazine. She holds an MBA from Columbia University and currently sits on the boards of four Fortune 500 companies as well as several nonprofits.

Alexander Kopelman has written or co-written nine books. He holds an MBA from NYU and a degree in English from Vassar College.

Foreword Author Ed Whitacre, Jr. is the former Chairman and CEO of General Motors. He is also a former chairman of the board and CEO of AT&T.

The Empress Has No Clothes