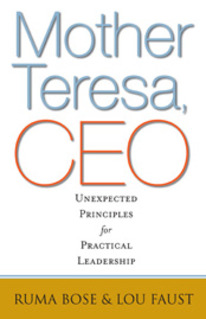 Mother Teresa in the Role of Business Leader

San Francisco, CA - Mother Teresa has gone down in history as the Catholic nun who dedicated her life to serve “the poorest of the poor.” A Nobel Peace Prize winner in 1979, she became beatified as a saint in 1997 after her passing and given the title “Blessed Teresa of Calcutta.” Pope Benedict has declared this year starting with Mother Teresa’s August 26th birthday, which would have been her 100th, as the “Year of Mother Teresa.” Her lessons of compassion for the poor and sick have touched millions around the world and will not soon be forgotten.

Mother Teresa, CEO (July 2011; $21.95; 150 pages; 978-1-60509-951-4) by Ruma Bose and Lou Faust presents the saint in a different light, one that examines her lifetime accomplishments through the perspective of business leadership. After all, Mother Teresa managed to grow an organization of 12 people to one that operates in 100 countries with a full-time staff of 4,000 and over 1 million volunteers, and build a brand that is recognized across the globe.

The book depicts Mother Teresa a pragmatic, realistic leader who raised billions of dollars and helped millions of people over the span of 47 years. This often meant making tough decisions, such as accepting a donation from the autocratic and corrupt Duvalier family in Haiti as well as Charles Keating, for which she was highly criticized. However, her distinctive leadership style, which was based on absolute simplicity and practicality, helped her build one of the word’s largest and most successful global organizations, the Missionaries of Charity.

Bose and Faust have distilled Mother Teresa’s leadership style into nine essential principles that readers can apply to their own lives and organizations. These principles provide new insight to approach the dilemmas business leaders face as they lead organizations and run personal lives. The book also includes Bose’s personal accounts of her time with Mother Teresa, as well as Lou’s reflections on his own life learning and applying the lessons.

Mother Teresa did not fit into a typical box and she did not have a traditional leadership style. As a result, Mother Theresa, CEO is not a typical leadership book, nor is it a religious book. It is a book about leadership and principles that were learned by observation, inspired by example, and are universally applicable. While modern business leaders don’t have to be saints to apply these lessons, the powerful impact of Mother Teresa’s touch will make a dramatic improvement in any organization.

Ruma Bose is a successful entrepreneur and executive in the consumer industry with over 15 years of experience. In 1992, Ms. Bose spent eight months in Kolkata working with Mother Teresa and the Missionaries of Charity. Currently, she serves as President and Co-CEO of Sprayology, a homeopathic and vitamin wellness company. Her career in business includes developing strategies that have raised millions for profit and non-profit ventures. She lives in New York City.

Louis Faust, III is a businessman with more than 25 years of corporate experience. Most recently he was President of Newdea, Inc., a collaboration platform for philanthropic impact. He also is the Managing Partner and Co-founder of Colorado Technology Partners, LLC. Over the past 15 years, Mr. Faust has held a number of board and senior management positions, having run three institutionally funded companies during this time. He lives in Boulder, Colorado.

Two Birds in a Tree