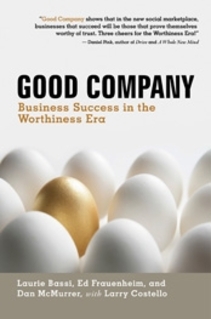 No. A different story is unfolding.

The authors call it the “Worthiness Era.” And in it, the good guys are poised to win, because good corporate behavior is no longer optional but the key to success.

Good Company explains how this new era results from a convergence of forces, ranging from the explosion of online information-sharing to the emergence of the ethical consumer and arrival of civic-minded Millennials. Across the globe, despite lingering effects of the Great Recession, people are choosing the companies in their lives in the same way they choose the guests they invite into their homes. They are demanding that companies be “good company.”

The authors take a tough-minded look at whether worthiness pays off with the Good Company Index, a unique ranking of the Fortune 100 companies on their records as employers, sellers, and stewards of society and the planet. The encouraging results: companies in the same industry with higher scores on the Good Company Index consistently outperformed their peers in the stock market over 1-, 3-, and 5- year periods.

Not only do the authors have the hard evidence that good behavior pays, they have used the principles of the index at their own investment firm to delivery market-beating results.

The Good Company Index will turn heads on both Wall Street and Main Street. Only Disney and FedEx got ‚“A ‚” grades. Some highly-regarded firms like Microsoft and American Express earned ‚“B ‚”s. But there are surprises. Among them: Walmart, often pummeled in the press, outscored media darling Berkshire Hathaway. Warren Buffett’s conglomerate earned a C-, thanks partly to financial misdeeds at a subsidiary.

Why This Book Will Make A Difference

Good Company takes the debate about corporate social responsibility to the next level. It updates the oft-heard aphorism that companies “can do well by doing good‚” showing that increasingly companies will not be able to do well unless they do good. The Good Company Index will become key to investment decisions and corporate valuation. What’s more, the authors give business leaders concrete tools for adapting to this new era, in which only the thoroughly worthy will thrive.

Good Company sounds a clear warning. Less-than-fully commendable businesses like G.E. Goldman Sachs and BP may be able to survive in the years ahead. But unless they shift to a course of real reciprocity with their stakeholders, they will not flourish. The business world is changing. Changing for good.

Laurie Bassi is an economist and expert in human capital analytics. She is CEO of McBassi & company, and also chairs Bassi Investments, which uses the principles of the Good Company Index to manage assets. She holds a Ph.D. in economics from Princeton University and spent the early years of her career as a tenured professor of economics at Georgetown University. She is the author of over 80 published papers, including two articles for Harvard Business Review.

Ed Frauenheim is a journalist with 15 years of experience writing about topics including technology, work, business, and education. He currently is Senior Editor at Workforce Management magazine. Ed previously has worked at CNET News.com and the Oakland Tribune chain of newspapers. He earned a bachelor’s degree in history from Princeton University and a master’s degree in education from the University of California at Berkeley.

Dan McMurrer is the chief analyst at McBassi & Company and chief research officer at Bassi Investments. He is also a registered investment advisor, and works with Laurie to manage Bassi Investments' portfolios. Prior to cofounding McBassi & Company, Dan worked in research positions at the Urban Institute, Saba Software, the American Society for Training & Development, and the U.S. Department of Labor. He is the co-author of two previous books as well as multiple articles. He holds a bachelor’s degree in politics from Princeton University and a master’s degree in public policy from Georgetown University.

Business Success in the Worthiness Era