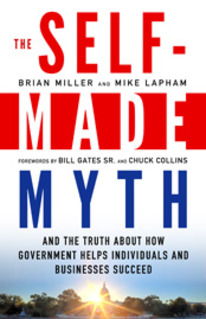 San Francisco, CA -- If one truly believes that all wealth derives from the heroic efforts of “job creators” and individual business leaders, then government can only get in the way and progressive taxes are viewed as “punishing success.” We’ve heard this kind of language recently, and we’ll hear a lot more of it in the year to come. There’s just one problem: It is just not true.

So assert the authors of THE SELF-MADE MYTH: and the Truth About How Government Helps Individuals and Businesses Succeed (Berrett-Koehler; March 2012; paperback; $17.95). Brian Miller, executive director of United for a Fair Economy (UFE), and Mike Lapham, co-founder of UFE’s Responsible Wealth project reveal the hidden but very crucial role government and society have played in the success of America’s richest individuals and business leaders.

While many members of the 1% perpetuate the myth that they worked their way to wealth all on their own, Miller and Lapham present the facts that many fail to consider, shedding light on how individual success is reliant upon many external factors. Among these factors, the authors emphasize the role of public education, research and development grants, social services, roads and highways, and laws and regulations that establish a stable business environment.

How we view the creation of wealth and individual success is critical because it shapes our choices on taxes, regulations, public investments in schools and infrastructure, CEO pay, and more. In a time of economic hardship and political paralysis, it is more important than ever that the self-made myth is replaced with a more honest and balanced understanding of success. That is what the authors aim to achieve.

Brian Miller has served as executive director of United for a Fair Economy (UFE) since 2009, drawing on nearly 20 years of experience as a community organizer, coalition leader, media spokesperson, writer, researcher, and nonprofit director.

Mike Lapham is the project director and co-founder of UFE’s Responsible Wealth project, a network of business leaders and wealthy individuals advocating for more progressive taxation. In addition to directing the program, Lapham is also a member, having inherited stock in his family’s paper mill in upstate New York.

The Self-Made Myth: and the Truth About How Government Helps Individuals and Businesses Succeed

By Brian Miller and Mike Lapham

Advanced Accolades for The Self-Made Myth

“It is critical to change the conversation about how wealth is created, who creates it, and the role of government, and this book does that effectively and importantly. And it couldn’t be more timely. I urge you to read this book and get engaged in the debate about progressive taxes.” -Bill Gates Sr.

“This book challenges a central myth that underlies today's anti-government rhetoric: that an individual’s success is the result of gumption and hard work alone. Miller and Lapham clearly show that personal success is closely tied to the supports society provides. Must reading for all who want to get our nation back on track.” -Robert Reich, former US Secretary of Labor

“Miller and Lapham debunk the self-made myth that has been bought and sold by the corporate media. I urge anyone who cares about forging a more just and fair economy to buy this book, and take its smart ideas to heart.” -Katrina vanden Heuvel, Editor & Publisher , The Nation

“After decades of disingenuous bashing of community and our common interests, this book serves as a reality check, reminding us that no one can survive without the contributions of the rest of us.” -Former US Senator Carol Moseley Braun

And the Truth About How Government Helps Individuals and Businesses Succeed

How to Attract and Keep the Best People